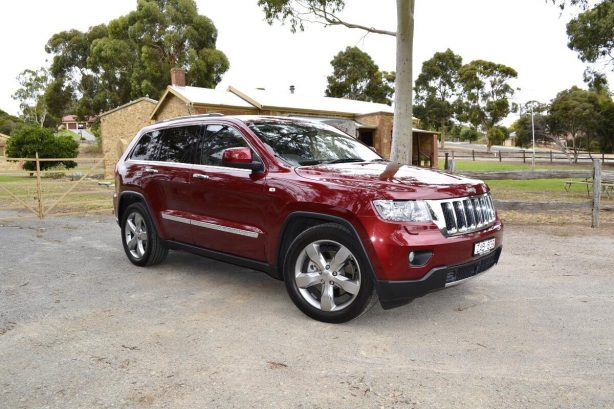 There is nothing more quintessentially American than a Jeep, with a heritage that stretches back to 1941 when the first Willys MB Jeep was produced for the US Army. It played a significant role in mobilising the troops during World World II. In 1945, it evolved into the civilian version, making Jeep the oldest SUV and off-road vehicle brand today.

The Cherokee name was first used in 1974, on the SJ series Jeep Cherokee. It was a big vehicle, even for its time and was powered by a choice of inline six or V8 petrol engines. They were paired with a four-speed manual gearbox that was pinched from a truck.

The 2012 Jeep Grand Cherokee Overland we reviewed here, in comparison, is far more advanced. It is still big and propelled by 3.6-litre V6 engine, but that’s as much as it shares with its illustrious predecessor.

So, does the legendary Jeep have the all-round usability and versatility that buyers are looking for in the ultra-competitive SUV segment?

Designed to lead the charge against the perennial SUV of choice, the Toyota Land Cruiser Prado, European heavyweights such as the Land Rover Discovery and Volkswagen Touareg, and local hero, the Ford Territory, the range-topping Grand Cherokee comes across as handsome, in a rugged kind of way. 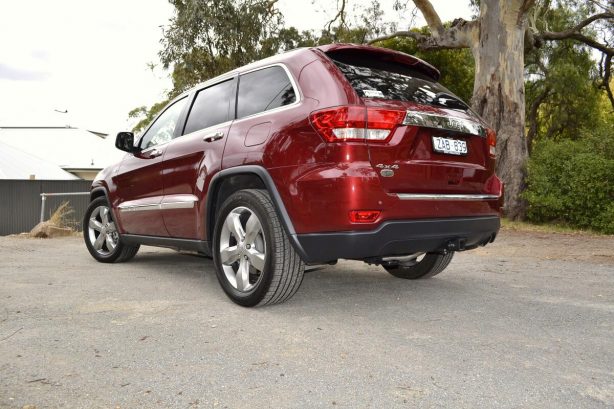 Inside, the driver and front passenger sit majestically on nicely padded heated and cooled leather seats. The attractively designed dash is logically laid out and features lots of real wood, while the thick-rimmed leather and wood steering wheel feels excellent to the hold. Conveniently, the electrically operated steering column and driver’s seat move into the driver’s chosen position when the engine-start button is depressed, and move away when the engine is stopped.

Although most major surfaces are all covered in leather, some of the lower dash plastics feel cheap, especially in the Grand Cherokee’s price range. 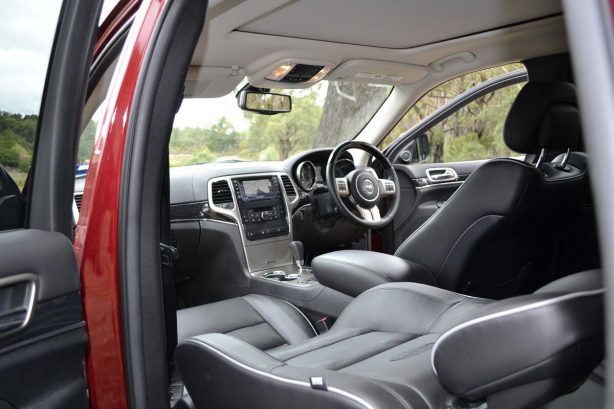 There are plenty of space in the luxuriously appointed cabin, with good head and legroom, even with a vast, headroom robbing, glass sunroof. Beyond the electrically-operated tailgate lies a huge 782 litre luggage space. We are also pleased to find a full-size spare under the cargo floor. Thoughtfully, Jeep has also included a built-in rechargeable torch that is cleverly stowed away in the boot.

With the majority of SUVs spending most of their life in the urban jungle, it is just as well the Grand Cherokee possesses good road manners. The 210kW/347Nm 3.6-litre V6 petrol pulls strongly throughout its rev range but is vocal at high revs, with a coarse induction note.

While the standard 5-speed automatic is smooth, it is slow and lacks the extra gear ratios required to better spread the engine’s torque curve. Happily, Jeep has promised the more superior ZF 8-speed automatic will be arriving later this year. Despite its tall stance, the Grand Cherokee doesn’t feel as top-heavy as some other SUVs we have tested recently. Its poise and road ability is in a class of its own, thanks to the Quadra-Lift air suspension and Selec-Terrain system that are standard on the Overland. 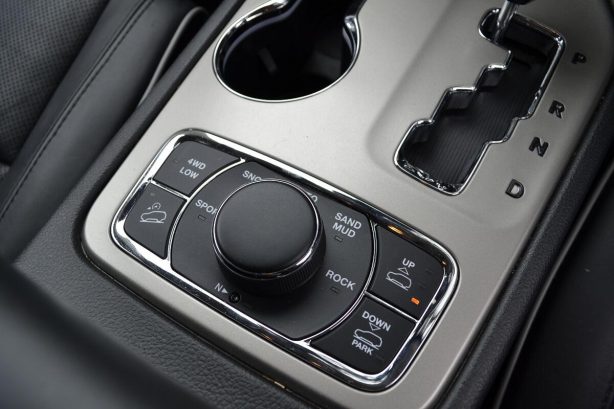 The console mounted system enables the driver to effortlessly choose the height of the vehicle, depending on the terrain. In Automatic, the computer will work out the best ride height for the car based on information from a myriad of sensors. Sport mode will drop the vehicle’s ride for better aerodynamics and road holding, while Rock mode lifts the car to its maximum height for rough terrains.

The system works brilliantly, endowing the Jeep with good body control and overall directional stability on the tarmac, while excelling equally off the black top. The Grand Cherokee’s steering isn’t the most communicative but is nicely weighted and accurate. 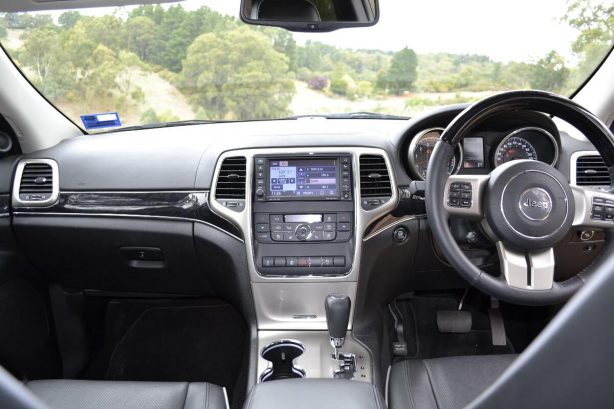 The cabin quality of the Jeep Grand Cherokee is a vast improvement over the old model. There is a general upmarket feel to the enormous cabin. The instruments are clear and easy to read, while all switchgear feels agreeably hefty, albeit lacking the crisp precision of Japanese and European rivals.

The test vehicle with 7,000km on the clock feels solid, with no annoying rattles or squeaks.

Our stint with the Grand Cherokee returns 12.4L/100km of unleaded petrol, with an equal mix of city, highway and beaten tracks traverse.

This is not a bad effort considering the V6 Grand Cherokee weighs over 2.2 tonnes, and just 1.4L/100 off the official sticker’s claim.

The Grand Cherokee packs features that will shame many more expensive rivals. Our test car asks just $65,000 and has just one option – the $495.00 Deep Cherry premium paint. 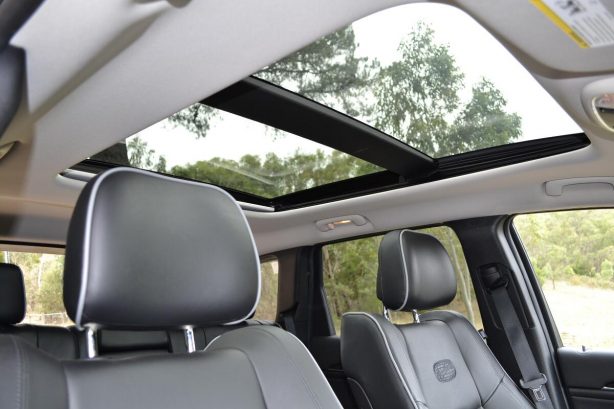 The only feature that let down the otherwise classy cabin is the foot-operated park brake that is bothersome to use and infringes on legroom.

Annoyingly, Jeep’s Adaptive Cruise Control system disengages below 20km/h with a blaring beep asking the driver to hit the brakes!

While the Quadra-Lift air suspension has a ‘park’ feature that will drop the car’s height for ease of entry and exit, it doesn’t do so automatically. Activating the system takes a good 10 seconds and can only be done while the car is travelling below 25km/h.

While it may not possess the brand cache as premium German marques such as the BMW X5 or Audi Q7, it is infinitely better equipped and trumps them for off-road abilities.

Buyers will be fool-hardy to look past the Grand Cherokee.