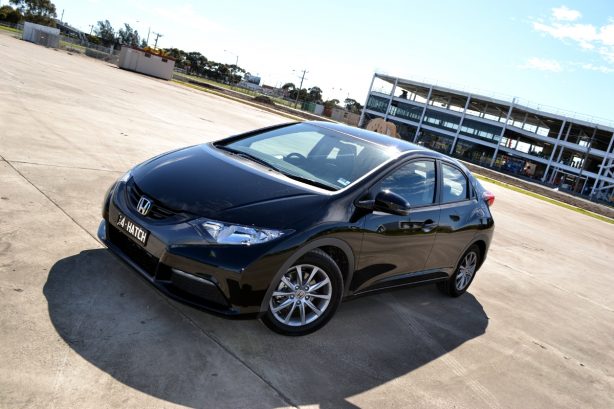 The ninth generation Honda Civic Hatch was designed in consultation with the owners of the model it replaces. It is a good thing that a car maker actually listens to what their customers have to say about their car. So, Honda had used the feedback to develop an improved new model that it hoped will be the new crowd favourite.

The UK built Civic Hatch is available in two variants – the base VTi-S used in this review and the more luxurious VTi-L. Both have the same 1.8-litre four-cylinder engine.

Although the triangular exhaust tips of the old model are gone, the new Civic Hatch still looks slightly crazy and unconventional compared to other hatchbacks. The front end is lower and wider than the 2006 model, with day time running lights neatly incorporated into the front bumper. Honda claims the new model is even more aerodynamic than the previous model, which explains the curvy lines along the side of the car, designed to smoothen air flow and reducing drag.

The rear design of the new car is, in my opinion a big improvement over the old model. The rear lights have been raised higher. They now form a single piece together with the third brake light that stretches across the rear windscreen and also acts as a rear spoiler. The overall shape is also better proportioned compared to its predecessor. 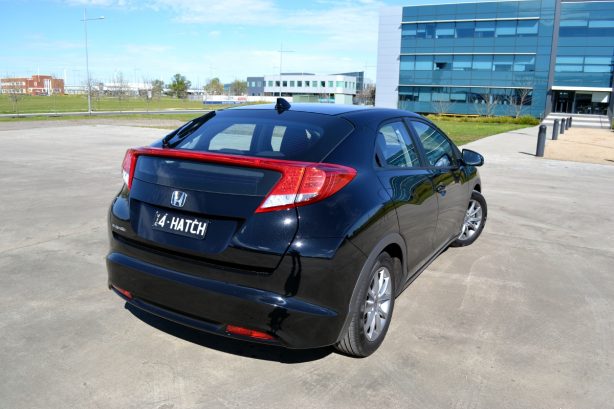 Inside, the futuristic dashboard continues to set the car apart from the rest. Just like in the previous model, the cockpit features a two-tier layout with the top section housing a digital speedometer and multi-function LCD. Three tunnels in the bottom section house the tachometer, fuel and temperature gauge.

One thing I like most about the interior is the location of the gear lever. Its raised and slightly tilted position, combined with the nicely bolstered seats, make for an excellent driving position and ergonomics.

At the back, there is enough room for two and a half adult.

The 1.8 litre i-VTEC engine in the Civic Hatch which it shares with the Civic Sedan, produces a modest 104kW at 6500 rpm and 174 Nm of torque at 4300 rpm. While it does its duty well for city driving, the engine really needs to be worked hard in order to get any decent power out of it, even with the ECON mode turned off (more on this later). The lack of torque means downshifting is always necessary even on a mild incline.

A 2.0-litre petrol engine, such as the one found in the Civic Sedan Sport, or the 2.2-litre turbo diesel offered overseas, are what the local Civic Hatch really needs.

Despite the engine needing a bit more power, the Civic Hatch is a very refined machine. The drivetrain is smooth and the engine revs effortlessly to its 6500 rpm redline without sounding like it’s got nuts in its cylinders. The six-speed manual transmission has a short travel and feels very sporty. Matched with closely stacked gear ratios and a light clutch pedal, gear changing is actually quite fun in the Civic Hatch. If you prefer the car to take care of itself, the fast shifting torque convertor six-speed auto is smooth and refine. There are even steering wheel mounted paddles for those occasional spirited runs in the country. 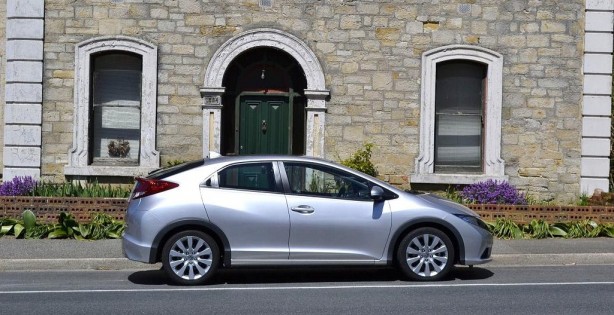 The Civic Hatch is a comfortable and stable highway cruiser. Road noise is well dampened, thanks to improved sound deadening around the cabin and wind noise is reduced as a result of a more aerodynamic body.

Around the bends, the Civic Hatch exhibits a hint of bodyroll but remains relatively composed. The 205mm wide Continental tyres offer exceptional grip both dry and wet. Unfortunately, the driving experience is let down by the vague and overly light steering.

Ride quality is one of the areas of focus highlighted for improvement by owners of the previous model. As a result the torsion beam rear suspension has been upgraded to fluid-filled bushes instead of rubber. Overall, the suspension setup is well balanced between handling and comfort. The ride is supple on most roads but overly rough surfaces can still unsettle the car. 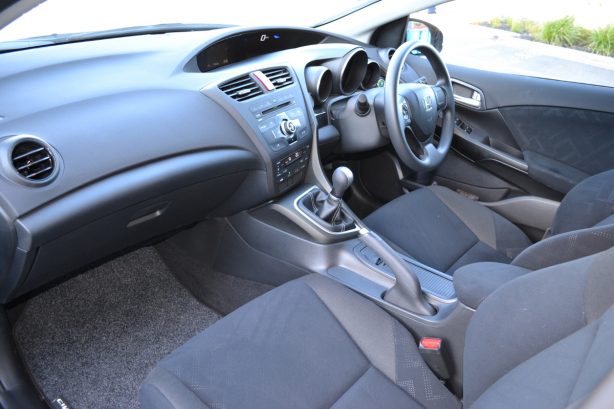 As you can expect from a Honda, the Civic Hatch’s build quality is excellent. Panel gaps are tight and everything is very well put together. The upper part of the dashboard utilises soft touch plastics and all the buttons and controls are nicely weighted with good tactile feedback. However, the lower plastics feel hard and flimsy.

Honda has also somehow failed to realise just how important the look and feel of the steering wheel is to a driver as it is the one thing that is in constant contact with the driver’s hands. It raises an appalling question as to why the leather stitched steering wheel found in the Civic Sedan did not make it to the Civic Hatch.

At the end of our week long test racking up a total distance of 700 km consisting a 50/50 split between urban and highway driving, the Civic Hatch featuring Honda’s Programmed Fuel Injection technology (PGM-FI) returned an average fuel consumption of 7.0l/100km, not far off from the 6.1l/100km figure Honda claimed in their brochures. The result was not helped by my heavy right foot due to the constant need to rev the frail engine.

Like the Sedan, the Hatch has an ECON button which is supposedly designed to limit the throttle and increase low-down torque. However, if anything, it feels more artificial than beneficial as there is no noticeable improvement in fuel consumption.

What annoys me most about the ECON mode is when there is an instant need for more power such as overtaking, the throttle is so limited that the car just wouldn’t go anywhere. So here is a tip, Honda: when pedal to the metal in ECON mode, have the ECON mode automatically disabled and then re-engaged when normal throttle position is detected.

The preference for RON95 or higher premium unleaded fuel means the Civic Hatch is not exactly cheap to run either. Not that it makes more power as the figure is exactly the same as the Sedan, which will happily accept regular unleaded fuel. 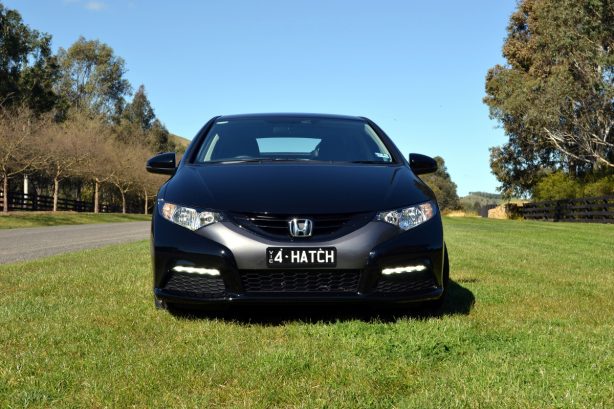 The 2012 Honda Civic Hatch has a bold design that stands out among other small hatchbacks in the market. It is well built and benefits from Honda’s enviable reliability record. It is a strong performer in terms of refinement and proves to be a good handler in both city and country driving. However, the package is let down by the uninspiring engine and the slightly high running cost.