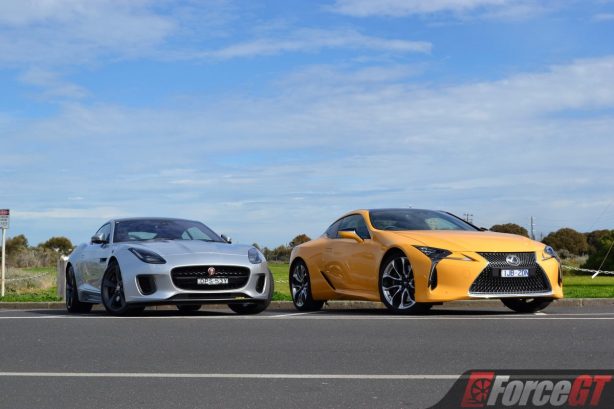 A visual feast for the eye with not much else missing. A one-spec, and one price, fit all proposition. Both V8 and hybrid versions are priced identically at $190,000 with all the kit you could ask for.

In typical Lexus fashion, there’s only a one option for the LC, the $15,000 Enhancement Pack featuring four-wheel steering and variable gear ratio steering for an even sharper response (not fitted to our test car). It also includes an active rear spoiler that deploys at 80km/h to manage airflow during performance driving, a carbon-fibre roof and an accouterment of Alcantara and carbon bits in the already luxurious cabin.

After all these years, the Jaguar F-Type is still a stunner, losing none of its catwalk glitz. If the Lexus LC is all futuristic and ultramodern, the F-Type is classically beautiful, with excellent proportions and one of sexiest posteriors ever.

Unlike the simple LC line up, there are no less than 32 F-Type variants, with engines spanning from a turbocharged four to the supercharged V6 and V8. There’s rear and all-wheel-drive, and coupes and convertibles to choose from.

Our contender here is the F-Type 400 featuring a 3.0-litre supercharged V6 priced from $183,800. But in typical Jag fashion, most nice-to-have features are optional.

Panoramic glass roof? That will be $2,060, Sir. Even a rear view camera, parking sensors and dual-zone climate control – standard on an $18,000 Toyota Yaris – are optional. The list goes on, and on, and on. The car you see here comes with nearly $15,000 worth of extras.

Thankfully, you still get some of the basics as standard, including limited slip differential, adaptive dampers and xenon headlights. 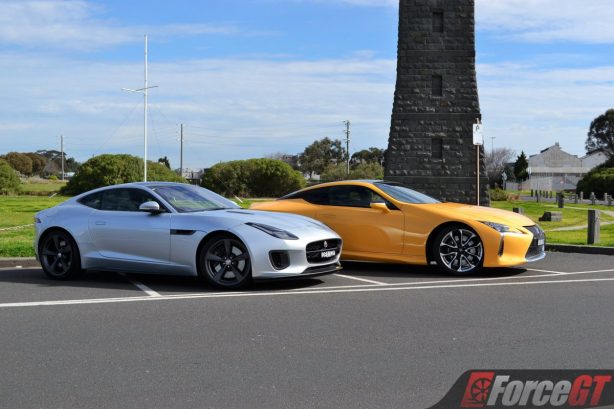 The Lexus’ fit and finish, along with its striking design flair tops the Jaguar’s rather uninspiring interior. Everything you feel and touch in the Japanese coupe feels a million dollars; from the magnesium paddle shifters to the one-piece aluminium trim around the climate control.

Its electrically adjustable front seats are supportive and driving position sporty, keeping you tight in your seats around the corners.

The LC’s LFA-derived digital instruments with its gliding centre rev counter are crisp and easy to use.

It also feels more specious inside, thanks to a longer wheelbase compared to the Jag.

Like cars of its ilk, the rear seats are essentially leather lined parcel shelves, although versatility improves slightly by dropping down the rear seats for extra cargo space – all 197-litres of it.

The F-Type’s aging interior feels dated and restraint. The different types of fonts and typefaces on the instruments and buttons appear to lack cohesion and the sat-nav is a little last generation. It can’t match the LC’s meticulous attention to detail, either.

However, its cockpit is still one of the most driver-focused with an excellent driving position that is low and very close to the rear axle.

Those lightweight seats provide exceptional lateral support but some of our tester find the back rest a little too firm for long distance cruising.

When it comes to luggage space, while the F-Type offers 310-litres on paper but it is mostly taken up by a space saver spare wheel, leaving precious little for anything else. There is no rear seat. The F-Type is a strict two-seater. 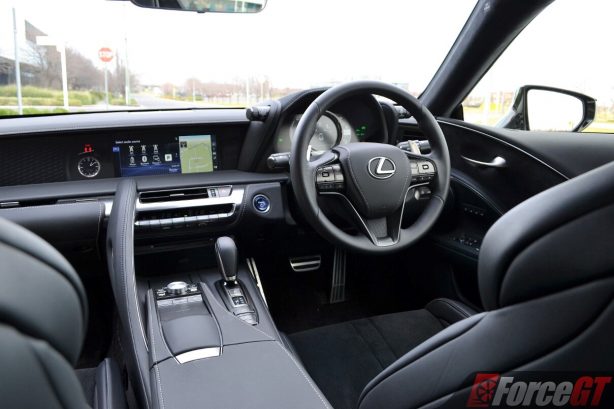 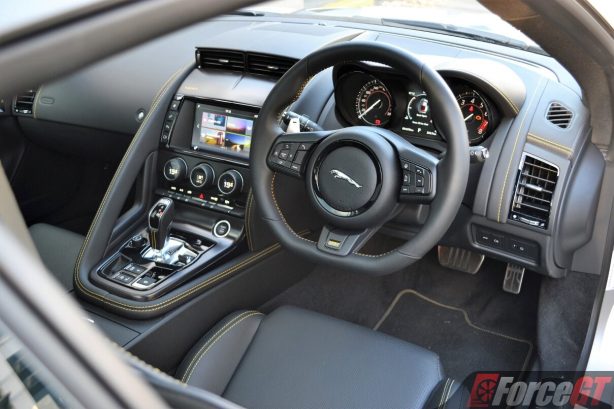 The LC’s old school naturally aspirated V8 is one its best attributes. Sonorous and loves a rev, it pulls hard all the way to its 7,100rpm redline as it builds up to its peak of 351kW and 540Nm.

The LC 500’s 10-speed transmission is smooth and as quick as any decent dual-clutch transmission. It even lets you bounce off the redline in manual mode but its shifting algorithm is so good you can leave it to its own devices most of the time.

It’s not without its flaws though. There’s a lengthy pause in neutral when shifting from reverse to drive or vice versa. Our test car also jerks and jolts unpleasantly on downshifts when coming to a halt.

The downside to chasing redlines and carving corners is more frequent visits to the pump. On test, we managed a combined average of 11.8L/100km, which isn’t too shabby given the LC’s weight and how hard it’s being driven.

The 400’s uprated 3.0-litre supercharged V6 almost matches the LC’s V8 in start-up theatrics, firing up with a race car-like bark from its twin central exhausts. Things get even better as the standard active exhaust opens up in full attack mode. And despite relinquishing two cylinders compared to the LC, the F-Type actually sounds louder than the V8 LC.

It also equals the Lexus in immediate engine response thanks to the supercharger that essentially removes any low-end torque deficit.

While the F-Type’s ZF-sourced eight-speed automatic responds well to kick down, it isn’t as fast in dishing up its ratios as the lighting-quick Lexus.

With launch control, the Jag blitz the 0-100km/h dash in 4.9 seconds (tested), although we believe it is capable of shaving an additional tenth off in ideal conditions and with proper tyre temperature (it still struggles for traction even with launch control). 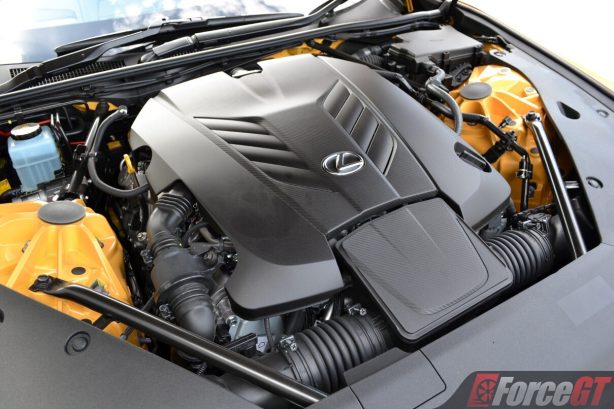 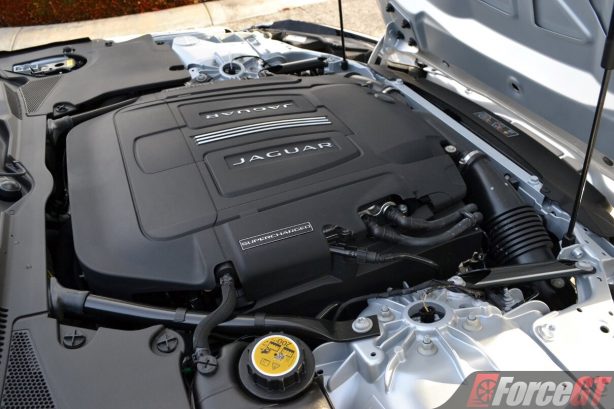 The LC 500’s ride is surprisingly unaffected by the low-profile 21-inch run-flat rubber. Together with expertly tuned adaptive dampers, the large coupe soaks up our pimply roads with great stride.

It is an excellent boulevard cruiser with trademark Lexus refinement and comfort, and head-turning style that makes you an instant superstar.

The Jag’s adaptive dampers are more firmly sprung than the Lexus. As a result, its ride errs on the firm side even in Normal mode.

While you wouldn’t describe it as harsh, the busier ride can become irksome around town. However, it becomes more compliant on the freeway with higher speeds.

Like the Japanese coupe, the F-Type commands attention wherever it goes although there’s no escaping the LC’s superior refinement and comfort. 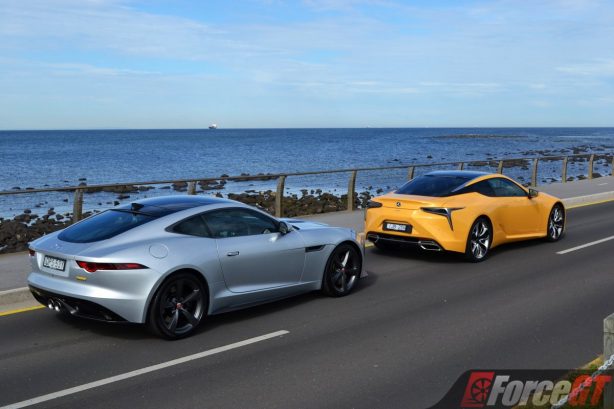 The LC’s electric steering is beautifully weighted, precise and quick, if a little muted in feedback.

In typical Lexus fashion, the ride is refined and very civilised in Normal mode and firm yet accommodating in Sport. Save Sport+ for the track where you can have a bit of fun with the LC’s tail.

It dashes around corners with confidence, but isn’t as precise as the Jag in tackling sharper bends, as the LC’s heavier overall weight dulls its dynamics somewhat.

The six-pot front and four-pot rear calipers bring the LC to a stop promptly and confidently.

Jaguar’s handling prowess is evident in the F-Type 400. It handles corners with poise and agility, feeling more confident than the LC 500.

Flick to Dynamic mode and the ride becomes too busy while the overly sensitive throttle has a tendency to spike inputs, causing the rear wheels to break traction and upset the car’s composure.

Braking performance is admirable with fine pedal feel that washes off speed without strain. 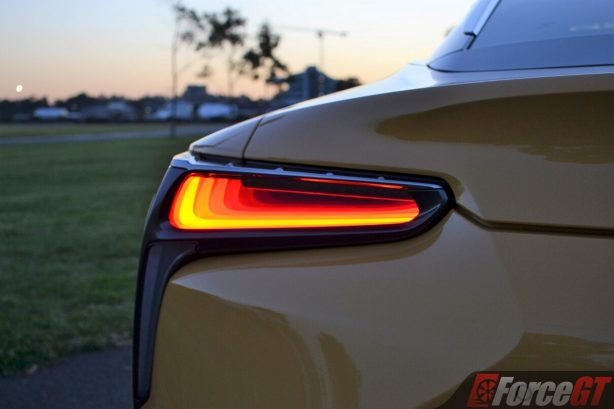 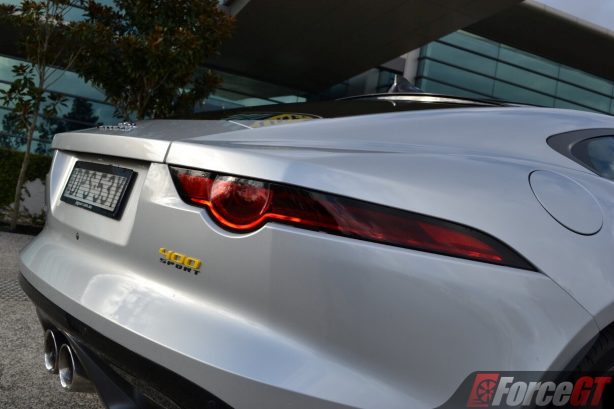 Both the Lexus LC 500 and Jaguar F-Type 400 are superb cars in their own right.

Both have head turning good looks and excellent engines but they have rather different execution and focus. The Lexus prioritises refinement over outright dynamic prowess, while the Jag is more athletic but a little less comfortable.

We would be happy to take either if judged on performance and handling alone but the Lexus just sets the pulse racing a little quicker, thanks to that awesome V8, concept car looks and better interior.