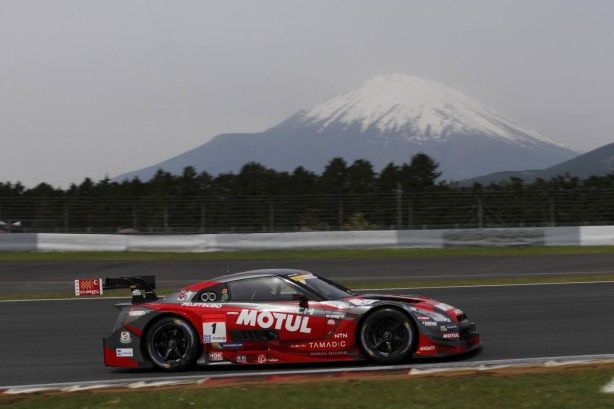 The Nissan GT-R has taken the chequered flag at Round 2 of the 2016 Super GT Championship held over May 3rd to 4th during the Golden Week vacation at Fuji Speedway in Shizuoka.

The #1 Motul Autech Nissan GT-R Nismo GT500 started fourth on the grid but achieved a superb comeback victory to take their second win in a row, having also won the opening round at Okayama.

With the #3 B-MAX NDDP Nissan GT-R NISMO GT3 also passing the chequered flag at the top of the GT300 class, it is the second year in a row that the GT-R has taken victory in both classes of the Fuji 500km race.

Fuji was hit by a heavy rainstorm that lasted from the night after qualifying right through to early morning on race day. However, the clouds parted soon after dawn and the conditions rapidly changed to that of a bright spring day. Under ideal conditions the formation lap started from 2pm in front of a large crowd of over 50,000 fans.

Starting from fourthth on the grid, the #1 GT-R opted to have Ronnie Quintarelli take the wheel for the first and final stint, while Tsugio Matsuda would take the reins for the middle of the race. From around lap 10 Quintarelli began to gain on the machine in 3rd and at the final corner of lap 14 he was side-by-side going into the straight where he managed to get passed and move up one position. When the race reached the 30 lap mark, most of the top runners began to head into the pits for routine stops. The #1 GT-R pitted at lap 39 to refuel, change tyres and switch drivers to Matsuda. Having taken victory in the opening round, the #1 GT-R was laden with 40kg of handicap weight and for this reason Matsuda was careful not to push too hard while steadily maintaining a fourth place position and ticking off laps. 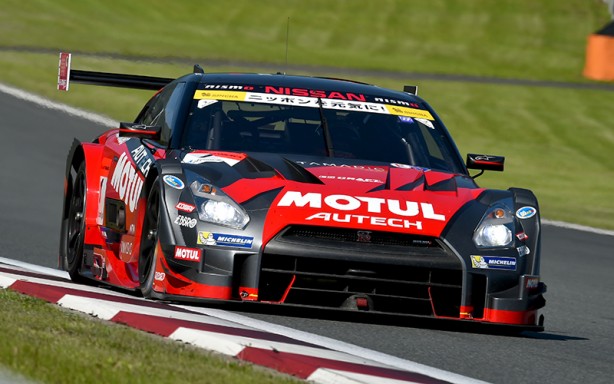 What most profoundly affected the outcome of this battle was the timing each team chose to carry out their second pit stop. The safety car was dispatched when one of the competitors experiences a burst tyre that greatly damaged the body of the vehicle and scattered debris all over the track. Most of the top machines went into the pits at lap 78 when the race was resumed but Matsuda remained out on the track until lap 81. Refuelling just enough for the remaining 29 laps, the NISMO crew was able to significantly shorten their pit stop time and send Quintarelli out for the final stint in 1st place.

From this point on a fierce duel was carried out between Quintarelli in the #1 GT-R and Oliveira in the #12 GT-R. Applying heavy pressure from the rear, Oliveira finally managed to overtake Quintarelli at lap 96. However, with just four laps remaining, the #12 GT-R’s left-rear tyre burst at 100R and spun off course. Having moved back into the top spot, Quintarelli went on to pass the chequered flag and gain their second victory in a row following the opening round.

As for the #46 GT-R, which had also been in the fight for the podium, the timing of its second pit unfortunately coincided with the dispatch of the safety car and, with the pit lane closed at the time, it was imposed with a 90 second pit stop penalty that left it finishing the race in seventh.

The #24 Forum Engineering ADVAN Nissan GT-R NISMO GT500 of Daiki Sasaki and Masataka Yanagida started from seventh on the grid but contact with another vehicle forced it into an unscheduled stop that saw it finish ninth. In spite of this, Sasaki was still able to record the fastest lap of the race.

In the GT300 class, the #3 B-MAX NDDP GT-R of Kazuki Hoshino and Jann Mardenborough started the race from fifth in GT300 class and steadily rose through the ranks to finish the race in the top spot. This made it two years in a row that the Nissan GT-R has taken victory in both the GT500 and GT300 classes of the Fuji 500km race. It was also another spectacular success for Mardenborough, a graduate of the Nissan PlayStation GT Academy program that turns gamers into professional racing drivers.