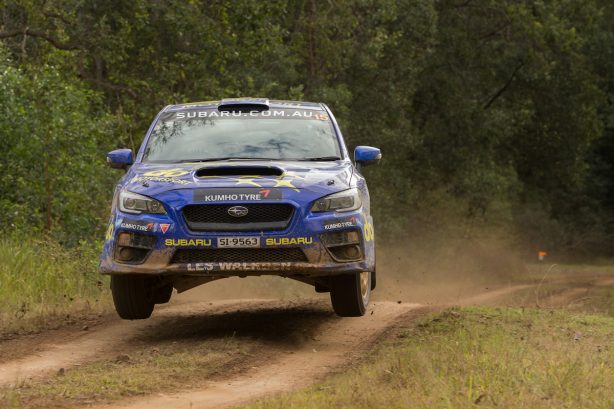 Subaru do Motorsport duo, Molly Taylor and Bill Hayes, have claimed their debut win for the team, in the Southern Safari Tasmania.

Their Group N production class WRX STI NR4 swept to victory in the 98.86 kilometre round of the Eastern Autobody Tasmanian Rally Series.

Molly’s win is believed to be the first by a female driver in the history of the Tasmanian championship.

The team was a consistent second across the first four stages, then pounced on stage five – ending with best times across the last seven stages.

It was a tight tussle across the day with Launceston brothers Marcus and Scott Walkem in their Mitsubishi EVO IX.

But patience paid off for the Subaru pair, who finished with an overall margin of just 29.6 seconds over the Walkems.

The local knowledge and expertise of the Les Walkden Rally team also helped the Subaru do duo. Team Principal, Les Walkden, also proved his ability, with an eighth-place finish in his Mitsubishi Pajero, in the off-road class.

Molly said: “We didn’t have a great start, with a puncture in the first loop of stages.

“From there the challenge was on and we really enjoyed battling with the Walkem brothers.

“Our first win for our car is a great moment for the whole team, so a huge thanks to them!

“Also to the organisers for putting on such a well run event on fantastic roads.”

Attention now turns to the next round of the Australian Rally Championship in South Australia in a month’s time.