Nissan wins back to back Super GT Championships 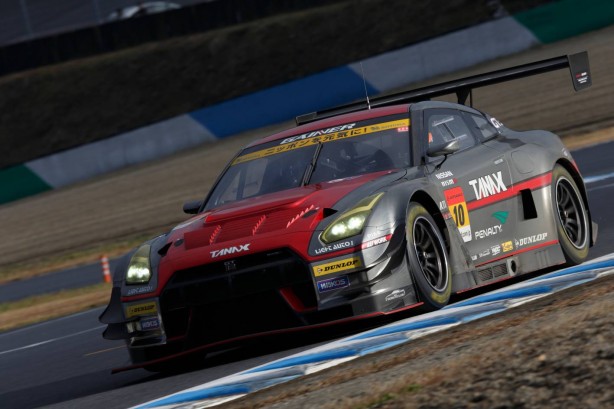 The final round of this year’s Super GT Championship was held on over the weekend at Twin Ring Motegi, Tochigi Prefecture in Japan, where the #1 MOTUL AUTECH Nissan GT-R NISMO GT500 of Tsugio Matsuda (JAP) and Ronnie Quintarelli (ITA) accomplished an amazing come back from 12th to finish second.

Due to strong rain that fell during the previous day’s qualifying sessions, the #1 GT-R’s set-up did not quite match the road surface conditions and they failed to advance to Qualifying 2. As a result they found themselves starting from 12th place on the grid. The #12 GT-R, on the other hand, was able to advance into Q2 where it qualified fifth and, at this point, it seemed the most likely to take home the title. 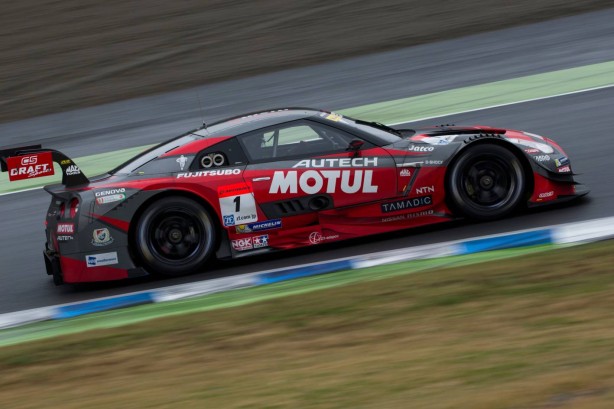 On race day, the rain that had been falling all morning abated and the start of the race looked like it would occur under dry conditions. However, just before the race began, a light shower started to fall. This saw every team hastily switch to rain tyres right at the last minute. Under these circumstances it seemed that the race would be anybody’s game.

The rainfall ceased immediately after the race started and, as the racing line gradually dried up, starting driver Quintarelli displayed a seriously fast paced performance that saw the #1 GT-R pass rival after rival with each lap and, by lap 10, Quintarelli had climbed up to sixth place. With the road surface becoming completely dry, the wear of every competitor’s rain tyres became severe and one after another all teams headed into the pits at around lap 20.

The NISMO team, which boasts some of the fastest pit work in the Super GT, managed to send the #1 GT-R back out onto the course as much as three seconds faster than their rival, IMPUL. Matsuda then rewarded this hard work with a tenacious drive that never gave the #12 GT-R a chance to regain its position. At this point the #1 GT-R was running in third.

After this, a crash prompted the dispatch of the Safety Car (SC) and, after the race resumed, the #1 GT-R leapt into the lead. However, the #37 Lexus RC-F put up a formidable fight and Matsuda was somewhat hindered when dealing with GT300 vehicles and back markers. In spite of this, he protected their position in front of the #12 GT-R and, after 53 laps, passed the chequered flag in second to secure the championship. 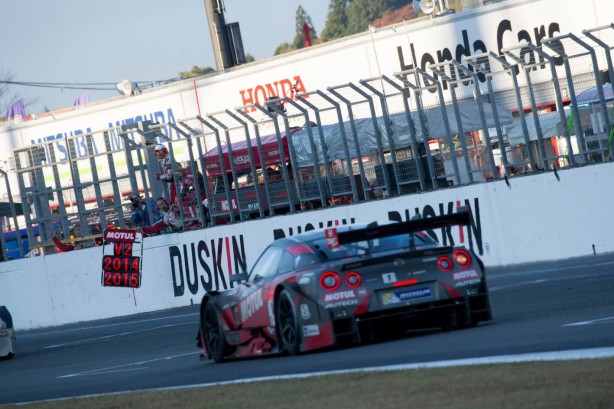 This is Matsuda’s second championship in a row following on from last year and, in Quintarelli’s case, after combining this consecutive championship with those of 2011 and 2012, he has now taken an impressive four Super GT titles.

Oliveira started from fifth place in the #12 GT-R and managed to protect this position in the first half of the race before pitting at lap 24 to hand the wheel over to Yasuda. Having pitted one lap earlier than the #1 GT-R, Yasuda returned to the track and expeditiously warmed up the tyres with the aim of pulling out in front of the #1 on its out-lap. However, the blisteringly fast work of the NISMO team resulted in an unstoppable reversal.

Being unable to achieve an immediate re-reversal during the #1 GT-R’s out-lap, he was set to pounce in the lap that followed but the dispatch of the safety car did not work in his favour and he missed his chance. From then on, with the #100 NSX-CONCEPT sandwiched between them, he kept a keen eye out for any chance to move up the order but he just couldn’t quite break through and he passed the finish line in fourth.

Having a mere two-point lead in the rankings over the #1 GT-R the title slipped out of their grasp right at the end of the season. The #24 D’station ADVAN GT-R (Daiki Sasaki [JAP] / Michael Krumm [GER]) started from an 11th place qualification and completed the race in 12th, while the #46 S Road MOLA GT-R (Satoshi Motoyama [JAP]/ Masataka Yanagida [JAP]) began from 13th but unfortunately made contact with a GT300 vehicle causing significant damage that forced them to retire.