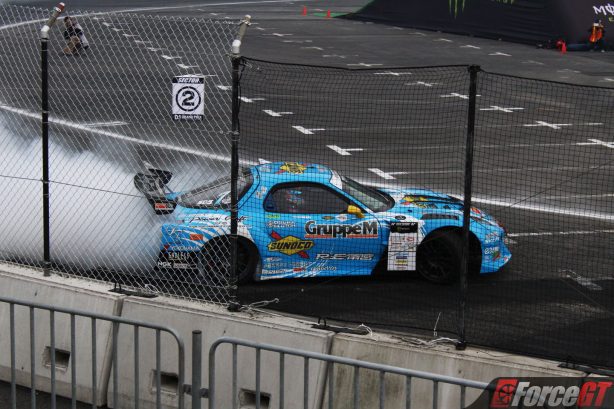 The rotary engine has a near cult like following around the world, the tiny metal barrel of spinning dorito’s has proven to be a modifiers dream with its light weight and huge power output. And nowhere is the spirit of the rotary engine more alive than in the heat of battle at a drift competition, revving through the stratosphere and sideways converting fresh rubber into billowing clouds of smoke.

It was by pure luck that I noticed an advertisement for the Tokyo D1 Grand Prix round while traveling on the train in Japan, so I’d cleared my schedule and caught the monorail to the man-made island of Odaiba for some drift action. I’ve been a longtime fan of the rotary engine and the RX series of cars Mazda released them in so today we’ll be taking a closer look at the rotary powered D1 machines. 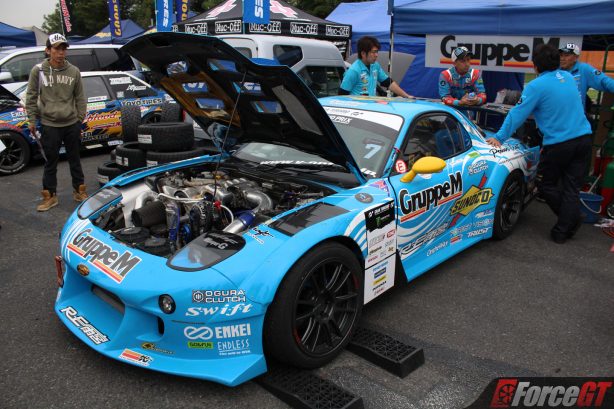 Where better to start than the grand master of rotary tuning in Japan, RE Amemiya and their 20b big single turbo FD3S RX-7. Even with the larger 20b triple rotor engine occupying the bay there’s still enough room to fit a v-mount intercooler setup making the most of the cool air drawn through the large front bar opening. Taking a tip from the McLaren F1, critical components have been wrapped in gold in order to insulate them from any excess heat. The job of controlling the 515kW of power on tap fell to Yukio Matsui and he didn’t disappoint, the baby blue RX-7 aggressively tackled the course layout while the grunty 20b filled the air with the rotary tune. 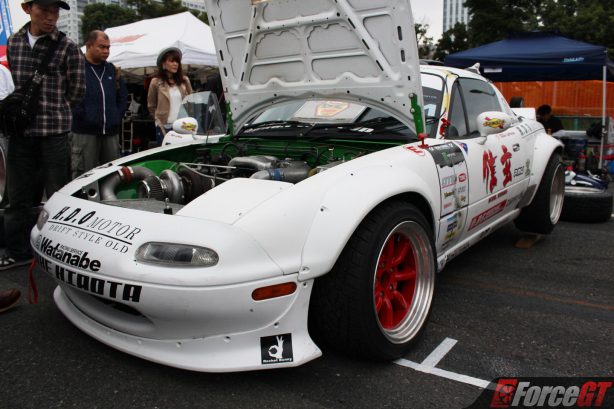 Originally released by Mazda in Japan as the Roadster with not even 100kW of power, this NA6CE Roadster has gone through a complete transformation. The H.D.O & HID Roadster piloted by Teruyoshi Iwai now pumps out over three times the factory power figure, 353kW courtesy of a 13b turbo conversion and cool air provided by another v-mount intercooler setup. Rocket Bunny bolt-on guards house a set of red faced deep dish RS Watanabe rims wrapped in four Toyo R1R tyres. 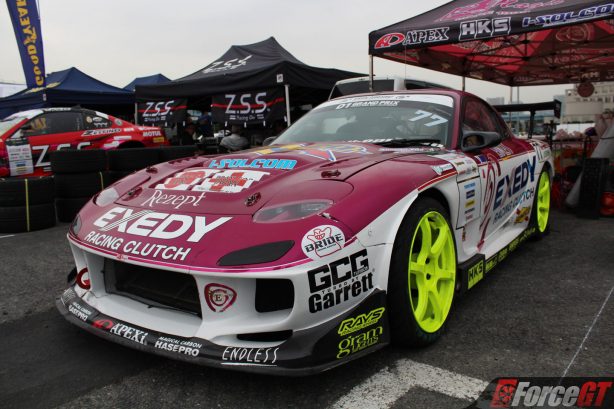 The Exedy R Magic D1 Racing FD3S RX-7 is driven by Ryuji Miki and doesn’t shock and awe like it’s fellow D1GP brethren in the engine department. While the others all get treated to insane engine conversions, this RX-7 makes do with the original factory motor. Of course, if it’s not broken, don’t fix it, improve it! Nitrous and a larger GCG GTX3582R turbocharger will improve things to the tune of 493kW. Pink wheels and stickers cover the driver’s side while yellow dominates the passenger side to good effect. 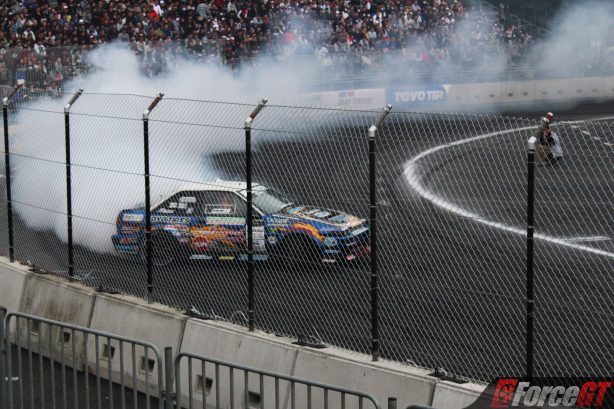 And finally we have my personal favorite of the day, the Toyo Tyres AE86 driven by Yoshihumi Tadokoro. A 13b turbo conversion in an AE86 is already bordering on madness, this one has took it a step further with a 20b turbo conversion that fits surprisingly well in the tiny engine bay. Matte black Watanabe rims with the sponsored set of Toyo R1R tyres get the 427kW of power to the ground. Huge bolt on guards should be enough to keep those rims and tyres covered but not so, look closer and you’ll see another smaller set of bolt on guards bolted onto the larger bolt on guards.

Previous 2017 Land Rover Discovery arrives in August from $65,960
Next Mercedes-Benz C-Class gets updated for 2017 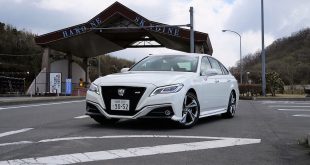 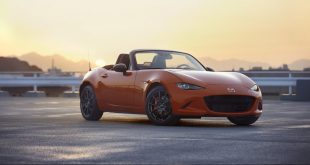 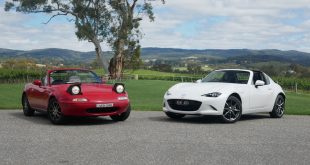 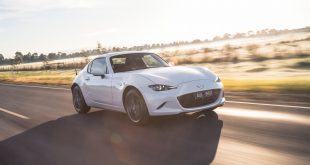 For the second time this year, the Mazda MX-5 is receiving a refresh, with more …