The early morning is cold and frosty. The streets are deserted. Many are still tucked in their beds for the Sunday sleep-in, regaining the much needed rest after a big night out the night before. It is 5.30 a.m. and I am in my garage bearing the freezing temperature doing a final check on my car, making sure the engine oil level is good, tyre pressure is ok and the brake fluid within limits.

The time is 6.00 a.m., I grab my final zip of coffee, shut the car bonnet and drop myself into the driver’s seat. I start the engine, let it warm for a bit and back up the drive way. It is a 30 minutes drive to the meet point, the Maccas at Nunawading in eastern Melbourne.

I have been looking forward to this for weeks, a drive through one of the best roads in Australia. The locals call this two-part route the Reefton Spur and the Black Spur, or as it is famously known, The Spurs. The Reefton Spur encompasses the roads between Warburton and Marysville, passing through McMahons Creeks and Reefton. The Black Spur starts from Marysville and ends in Healesville. Combined, these roads consist of over 300 corners across a distance of about 200km. Sweeping bands, hairpin corners, and long straights all meshed up together to form one of the roads you MUST drive if you are a car enthusiasts.

Arriving at Maccas at a little after the meet up time of 6.30, I find myself struggling to get a parking space. No it’s not because of people rushing into Maccas for the new jumbo burger, but it’s because of the massive turnout for this drive! Just at a glance, there are easily 30 cars waiting eagerly to plough through the Spurs. There is a really good variety of cars too, 370z, 350z, RX8, Silvia S15, R34 GTR, BMW E36 M3, Porsche Cayman, HSV Commodore, E-Class 63 AMG, 240z, Audi S3, Skyline 370GT, Evo IX and the king of the day, the R35 GTR!  And of course not to miss out, my own Skyline 350GT. 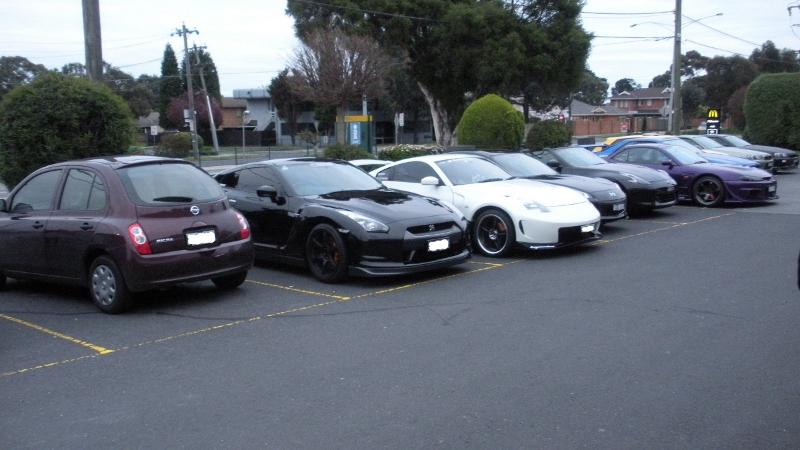 Once breakfast is sorted at the giant golden arch, we head down south towards the first catch up point, Warburton. At these early hours of Sunday morning, the urban roads are a please to cruise with minimum traffic. How I wished rush hour traffics were like this. Needless to say the back roads where we are heading should be even more quiet, which is the reason why we start this early in the first place.

At Warburton we pull over and park our cars along the main street that runs through the town centre. Time to get out, stretch my legs and take some photographs. Our cars literally take up the whole stretch of the main street through this small little town! 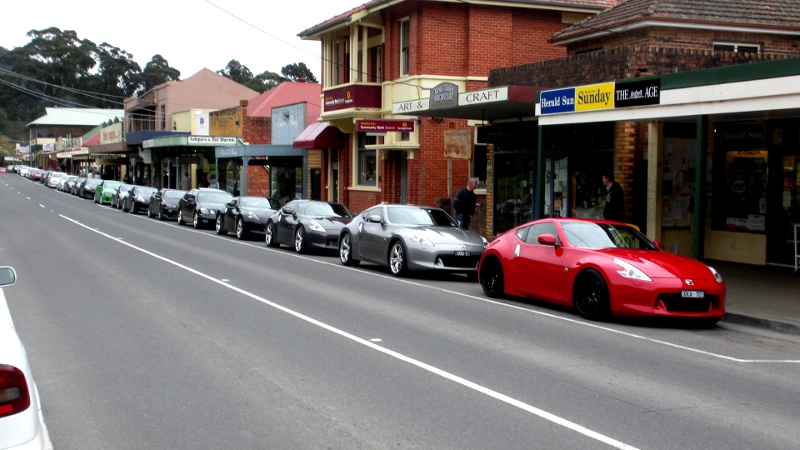 After a few happy snaps and a visit to the toilet it’s time to get back onto the road. From here on the Black Spur begins so it’s time to get serious. Ipod tucked away, stereo switched off and the GPS comes on. It is a good thing to have the GPS on when driving through the Spurs as it acts like a navigator, giving you a virtual view of the road ahead so you know what corner is coming up next. It is really useful when you are not very familiar with the road.

The first few kilometres of long straights with some slight curves thrown in here and there are good to warm things up nicely before heading into the twisty bits. Once the flat lands have gone past your view it is time to put the revs up and drop a gear or two because what lays ahead is an endless sequence of corners, one after another, cutting through the thick forest. With dense gum trees on both side of the road, there is absolutely no margin for error. One mistake and you will end up wrapping a tree. The speed limit here is 80 kph but trust me, if you can constantly stay on this limit through this stretch of road, you can only be in one of these cars: Nissan GTR, Porsche 911 Turbo, BMW M3, Mitsubishi Lancer Evolution or the Subaru WRX STi.

Driving through the Black Spur is a good test of both your car’s ability and your driving skills. And on a morning like this, clear and dry with virtually no traffic holding us up, it is an epic drive. A few 370Zs lead the pack up the front, followed by two R35 GTRs. In the middle of the pack are a couple of R34 GTRs, a Cayman and an M3. The rest of the cars make up the rest of the convoy. 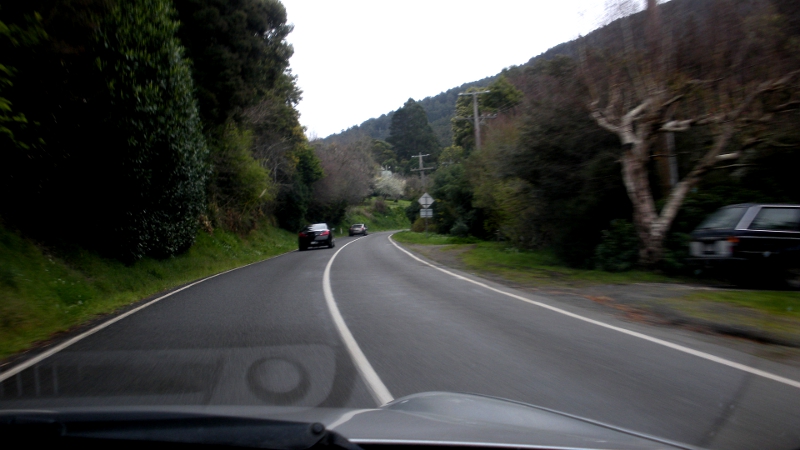 After some spirited drive through the Warburton-Woodpoint Road we now arrive at the turn-in into Marysville-Woodpoint Road. Time to take another break and regroup. From here on it is downhill through some more twisties all the way to Marysville. 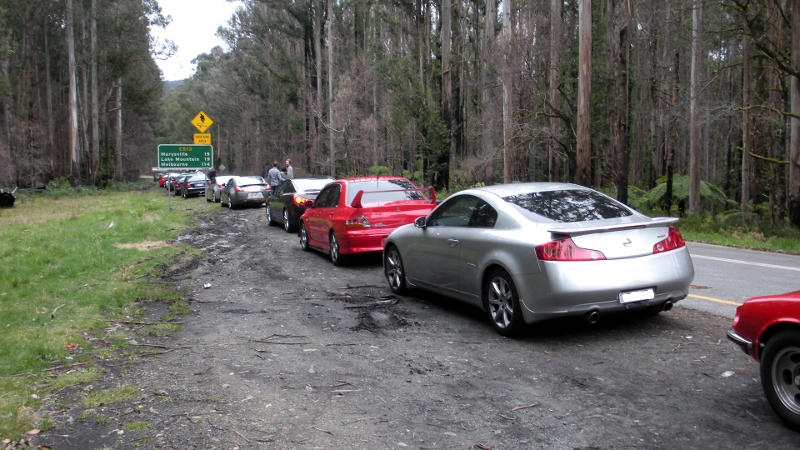 Soon we arrive at Marysville and it’s time to refuel ourselves with some nice meat pies from the bakery. It is now almost midday and the roads are getting busier. The run through the Black Spur will not be as smooth as the Reefton Spur. But that is fine because the best bits of the Spurs run are through the Reefton Spurs. 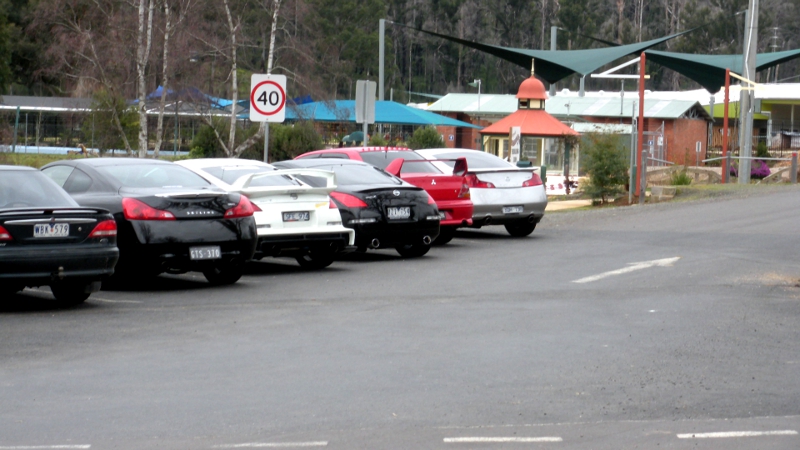 After filling up ourselves and some socialising, it’s time to finish off the rest of the drive. As expected some traffic gets in our way so now we are split into a few groups. The Black Spur has some good combination of hairpin corners and sweeping bends, just like the Reefton Spur, albeit with a better surface as it is considered a tourist road. The Skyline 350GT that I am driving is awesome for tight and twisty roads like this. It might not have the physics defying cornering ability of the GTRs but its torquey engine pulls healthily from down low of the rev range, so I can stay in the same gear for most of the time and just focus on attacking the corners, unlike the turbo cars where you always have to keep the revs up to remain in boost. 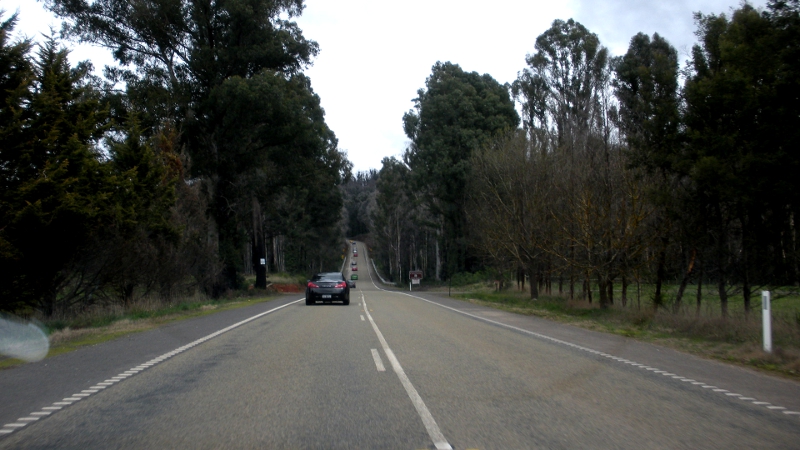 The Black Spur drive ends at Healesville, or starts here if you are going in the opposite direction. Arriving at our last meet point Healesville we all pull into a big car park and its time to get a few more shots of all the cars parking together. 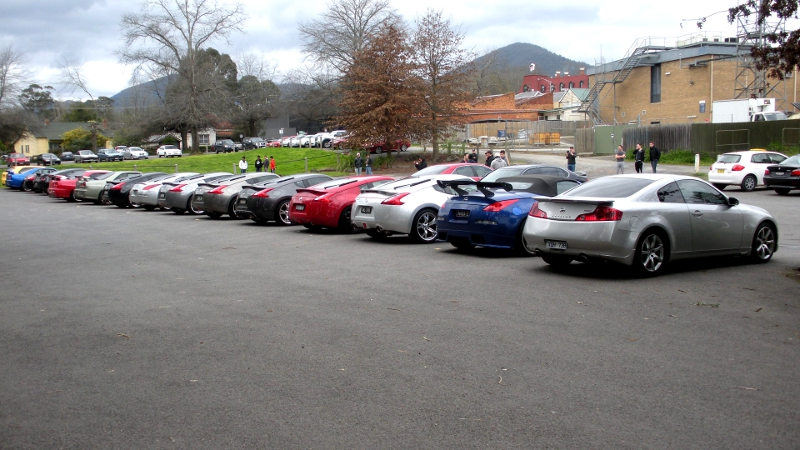 This is an epic drive and I never get tired of driving through the Spurs. Now it’s time to head home and get some much needed sleep.