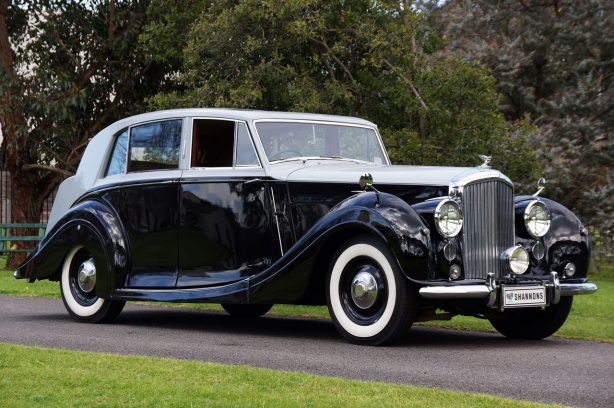 Spring has arrived and with it a collection of rare British vehicles will be up for auction at this year’s Shannons Melbourne Spring Auction. The date for the event is set for September the 19th with the half dozen post war British vehicles sure to cause a stir among the attendees.

A restored Black-over-Gold 1954 Armstrong-Siddeley Sapphire Saloon, an entry-level British Classic is expected to fetch between $14,000 and $18,000. Or perhaps an offering from Bentley is more your style, a Grey-over-Black 1950 Bentley Mark 6 featuring “Freestone & Webb” coachwork from Crewe is anticipated to pass through in the $30,000 to $36,000 range.

For an offering of $35,000 to $45,000 you could be the proud owner a 1961 Rolls-Royce Silver Cloud II V8 Saloon in classic white, this vehicle will be listed with no reserve and the bids are sure to come thick and fast.

A gorgeous Ruby Red-over-White 1950 Daimler Special Sports Drophead which is 1 of 500 built will make an appearance to the joy of enthusiasts and collectors, sporting Barker & Co Coachwork, it’s expected to move through the auctions at the $36,000 to $42,000 mark.

Two Jaguars will be available on the day, the first a Black-over-Clotted Cream 1947 Jaguar Mk 5 2.5 liter saloon, extensively restored and with an almost 70 year known history from new has expectations of $60,000 to $68,000.

The star of the British selection on auction without a doubt will be the highly sought after 1955 Jaguar XK140 SE Fixed Head Coupe which is sure to garner a heated bidding war with it’s no reserve listing. This particular vehicle comes in Cotswold Blue with Red leather, an original factory equipped Special Equipment model boasts the more powerful 3.4 liter engine and twin exhaust system. Originally a LHD Export model the car has since been converted to RHD and has had a bare metal restoration with numerous sensible upgrades ensuring there’s a long life ahead for the car. The expected price for this increasingly collectable XK is estimated at $120,000 to $130,000.