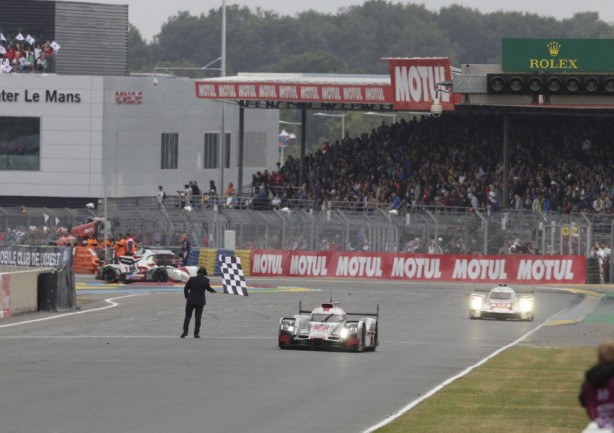 Audi has finished in 3rd place at the 24-hour race at Le Mans, missing its 14th victory it was aiming for in the world’s most famous endurance race.

The tally of the brand with the four rings remains impressive. In all 17 Le Mans runs, at least one Audi team has been on the podium. This time it was last year’s winners André Lotterer (D), Marcel Fässler (CH) and Benoît Tréluyer (F). In their Audi R18 etron quattro, they took third place behind two Porsche cars. In addition, with a lap time of 3m 17.475s, Lotterer achieved a new track record.

“That was motorsport at the very highest level. The spectators witnessed a tremendous endurance race in which the two Group sisters, Audi and Porsche, fought the expected fierce and thrilling duel for victory,” said Prof. Rupert Stadler, Chairman of the Board of Management of AUDI AG, who was one of the first people to extend congratulations in the Porsche pits after the checkered flag fell. “We can only congratulate our colleagues from Stuttgart on this success because we know exactly how difficult it is to win this race.”

“I found it particularly impressive that Audi and Porsche with two completely different concepts of hybrid race cars were practically driving on the same level throughout the entire race,” said Prof. Dr.-Ing. Ulrich Hackenberg, Member of the Board of Management for Technical Development, who watched the race in the garage of Audi Sport Team Joest. “Both Group brands with their concepts were clearly faster than Toyota. And that’s exactly what we’d like to show in the WEC and at Le Mans.” 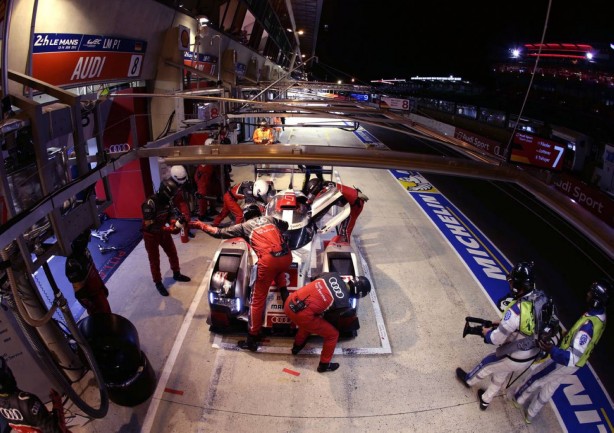 Victory in the 83rd running of the iconic endurance race was decided between Audi and Porsche. The lead kept changing between both manufacturers before deciding factors occured on Sunday morning.

All three Audi R18 e-tron quattro cars were fast but unfortunate. André Lotterer, Marcel Fässler and Benoît Tréluyer, despite an early puncture, were battling for victory before a large section of the engine hood came adrift on their R18 on Sunday shortly before 7.00 and caused further damage to the car. The repair was accomplished in 6.56 minutes, but the two lost laps could no longer be recovered.

Lucas di Grassi (BR), Loïc Duval (F) and Oliver Jarvis (GB) lost their chance for victory due to an equally bizarre and spectacular accident. Loïc Duval, in the ‘Indianapolis’ track section shortly before the end of the third hour, heavily hit the guard rails when he was getting out of the way of several slower vehicles and was touched on the rear by a GTE car. That the R18 was able to continue the race after a mere four minute repair caused amazement and recognition among the observers. In the end, di Grassi/Duval/Jarvis took fourth place.

The Audi R18 e-tron quattro of Filipe Albuquerque (P), Marco Bonanomi (I) and Le Mans LMP1 rookie René Rast (D) that always remained in striking distance at the top and took the lead several times, seemed to have the best chance for victory. But due to issues with the hybrid system the Audi trio dropped behind the two best Porsche cars on Sunday morning. As a result of the hybrid issues the front left drive shaft had to be changed three hours before the end of the race. The repair took 17 minutes and sealed seventh place in the overall classification.

“That our Audi R18 e-tron quattro was absolutely competitive is a positive,” said Head of Audi Motorsport Dr. Wolfgang Ullrich. “Unfortunately, each of our three cars had at least one crucial incident. And when you’re pitted against a strong rival like Porsche you can’t afford that. Obviously, we’re disappointed but in sports you’ve got to accept defeats as well. It simply wasn’t our race. My thanks go to all who have worked extremely hard in the past months and here at Le Mans as well.”

In the FIA World Endurance Championship (WEC), Audi, with André Lotterer, Marcel Fässler and Benoît Tréluyer has defended the lead of the drivers’ standings. The first opportunity for Le Mans revenge will be provided in the German WEC round at the Nürburgring on August 30.