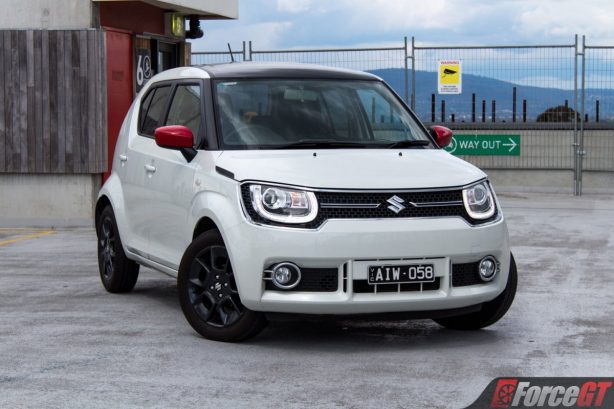 Suzuki knows what they’re good at and they stick to it, the Japanese company is comfortably at home in the small car market and their line up reflects this. In Australia we only get our hands on a small selection of what’s available and today we’re going to be putting the new 2018 Suzuki Ignis GLX to work.

It’s a tough car to pigeon hole, small yet tall and marketed as a Super-Mini SUV which is an oxymoron in my books as it hasn’t got the roomy practicality of an SUV or the AWD soft roading drivetrain credentials either. From the outside you’d be forgiven for labelling it as just another city car but there’s more too it than that. The euro inspired appearance and retro inspired rear is a mix of modern and old that grows on you, while the pearl white on our test car with that black roof was always a delight to glance at. 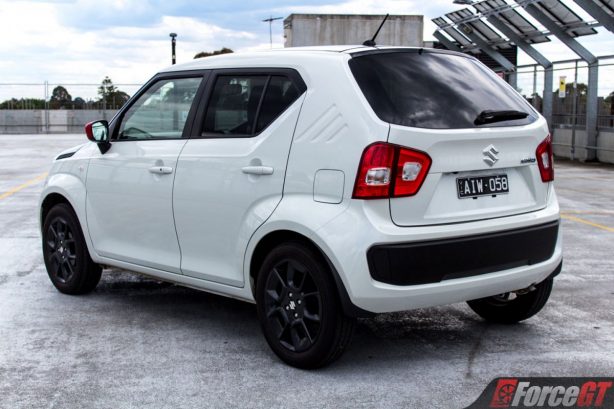 The two-tier Ignis range is priced affordably from $15,990 plus on-road costs, with the top-spec Ignis GLX tested here coming in at $18,990 plus ORC.

And with that comes compromises that are most apparent inside. Lots of hard plastics, most notably the door trims and the dashboard. The seats too are clad in basic cloth trim but at least they’ve splurged on the control surfaces with the wheel, handbrake and gear stick finished off in leather.

Visually the interior comes together rather nicely, there’s plenty of gloss red highlights and overall its all very bright and cheery. The seats are plenty comfortable and thanks to the taller design the Ignis has headroom to spare. 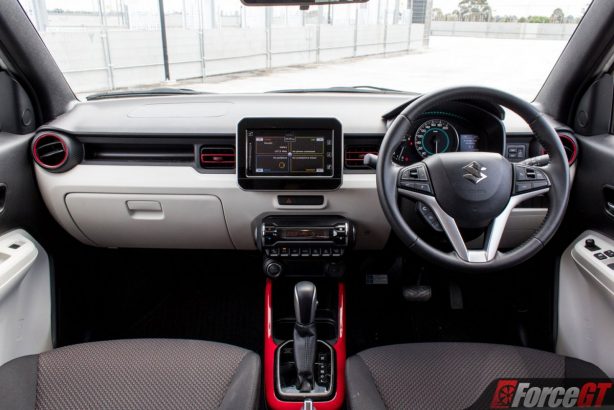 So what’s there to improve? The steering wheel isn’t designed for big hands as the rear shroud gets in the way and the trip computer controls are on the left of the wheel while the display is on the right which is odd.

Thick retro side pillars are cool from the outside but from within they hinder visibility forcing you to rely on the side mirrors more, unfortunately they’re not that large and could be bigger to give better visual awareness. And finally, at times the stereo can rattle the door trims with bass laden beats. 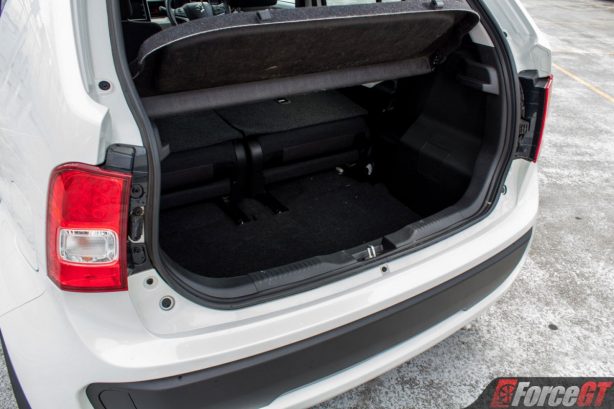 As a 4 seater the Ignis is great for those in the rear where there’s a bunch of leg, head and shoulder room. Better yet is that the rear seats can also slide forward for extra boot space or fold flat for further cargo carrying capacity. With maximum passenger legroom mode activated the Ignis has 264L of room in the boot which is not a whole lot but the boot floor is quite low which makes for easy loading. Ditch your friends and you’ve got a rather respectable 1104L to use which for such a small car is massive. 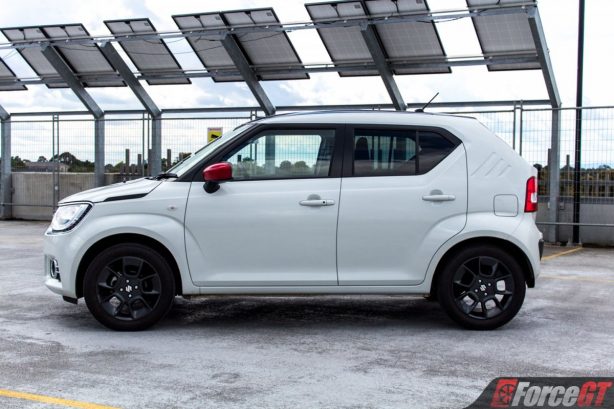 With just a multipoint-injected 1.2-litre normally aspirated 4-cylinder engine that generates 66kW when spun out to 6,000rpm, the Ignis could hardly be called quick. If anything it’s a little underpowered. The 120Nm of torque is just barely enough for day to day use but load it up with weight in the form of passengers and the engine’s lack of power becomes far too obvious. You’ve really got to rev it out frequently to get the Ignis up to speed which then saps the fuel economy.

If you’ve got the patience to bring your speed up slowly the engine will sip barely any fuel at all. I managed 6.0L/100km which had me rushing it up to speed. The official figure stands at 4.9L/100km which should be achievable for those with more self control than I.

The fitted CVT automatic is okay but not great, it’ll bring the engine up to redline and hold it there once you mash the go pedal at which point the engine starts screaming away, it’s quite a loud unit. When moving along at slow speeds the CVT occasionally shudders, overall it could stand to be more responsive with gearshifts, too. 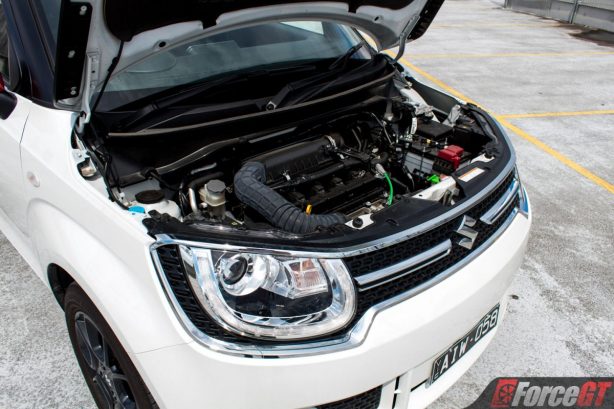 Luckily the suspension side of things is very well sorted. The Ignis has a soft ride with lots of ground clearance making it ideal for poor roads and the rare gravel road. Body roll is notable and overall grip levels are very low due to the small tyres. Do take extra caution in the wet as braking suddenly in poor conditions will quickly max out the available grip needed to bring you to a stop.

The ride is definitely tuned for comfort which the little Ignis pulls off with ease, soaking up bumps and ruts with aplomb. In tight carparks the Ignis performs well thanks to the small turning circle and short overhangs which make it an easy car to judge positioning with. Having said that, lock to lock will have you working your arms as the Ignis has a slow steering rack that would improve with a faster ratio. 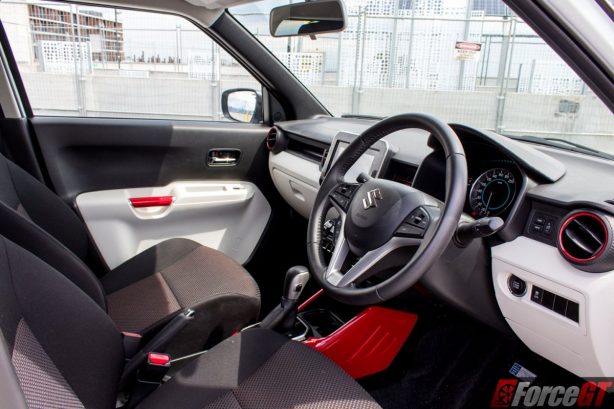 With only two grades of spec available, I was lucky enough to land the higher spec GLX which has a good selection of tech toys to play with. Right away the speed-limited cruise control is a brilliant and simple addition, it’s the next best thing to radar cruise control and good on Suzuki for adding it as standard to both trim specs.

The sound system was also far better than expected, cranked right up there’s no distortion and music sounds solid from the 6 speakers. There’s no digital radio but you do get Apple CarPlay and Android Auto through the 7 inch touch display. Also running through the touch display is the standard satellite navigation which while basic does the job.

With the limited rear view available the included reversing camera will get a lot of use and is a necessity for the Ignis. Exclusive to the GLX are the LED projector headlights that light up the road at night extremely well and also look awesome from the front.

On the convenience side you’ve got keyless entry and start as well as dusk sensing headlights; rain sensing wipers are absent though. Not yet ANCAP rated the Ignis does come fitted with front, side and curtain airbags for ease of mind and if the score is anything like the new Swift it should be a solidly safe car.

At first I was sceptical about the Ignis but with time it won me over. The styling lends it plenty of character that follows through inside. Small on the outside and big on the inside with flexible storage space, the Ignis is a small car done right. And then there’s the solid feature list with that great sounding stereo to tie it all together which makes the Suzuki Ignis a tough choice to ignore if you’re after a small city runabout. 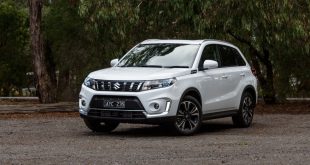 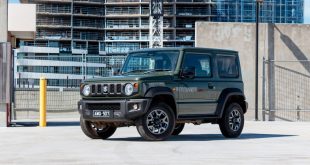 The four-year-old Suzuki Vitara has been given a refresh for the 2019 model year, and it’s …