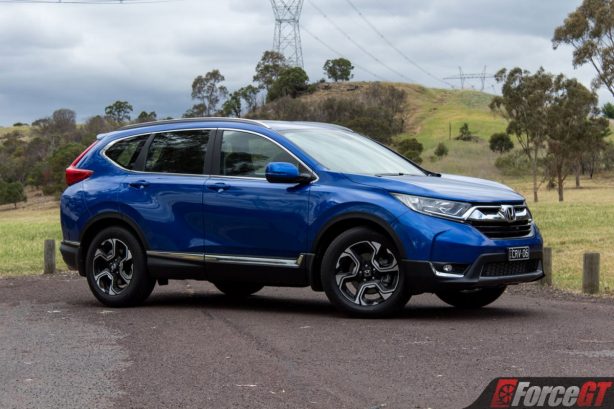 The introduction and subsequent domination of SUVs into the family car market arose from families who desired more than their 5 seater wagon or sedan could provide. The natural upgrade available came in the form of four-wheel-drive where its extra row of seats and higher driving position proved to be a huge hit. 4WDs had their own share of problems in that they were more suited off road and on farms than in the school car park.

Enter the SUV, a package that offered all the practicality needed for family life with none of the unrefined agricultural demands attached to a 4WD. Honda’s mid-size CR-V was one of the first to define the crossover market and in 2017 the 5th generation CR-V continues to put family needs first. 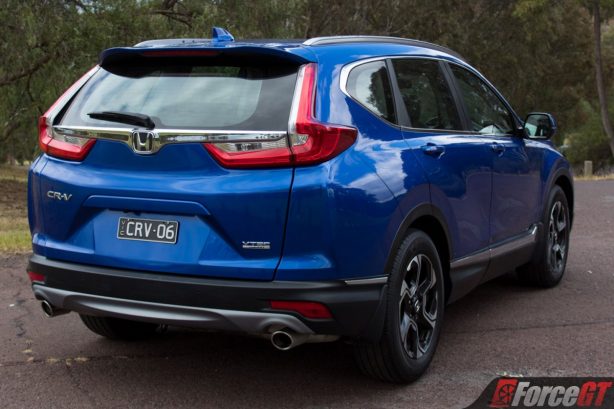 Honda has taken a good hard look at what families are after and its response is one of the most family-focused SUVs on the market. Boasting an all-turbo engine line-up and available in five variants, prices range from $30,690 for the entry-level VTi to $44,290 for the range-topping VTi-LX. All stickers exclude on-road costs.

For the first time in the CR-V’s history it’s now available as a 7 seater in the mid-spec VTi-L grade, and it’s this version I am are taking a closer look at.

On the outside the CR-V VTi-L is identical to it’s 5-seat siblings, the collection of sharp angled lines and chromed highlights fit right into Honda’s current design language. It’s bold and confident with a very American style. The 18 inch wheels look particularly aggressive under the pumped guards that appear to push the flanks of the bonnet up. Opinions may be divided but the CR-V looks great in my eyes. 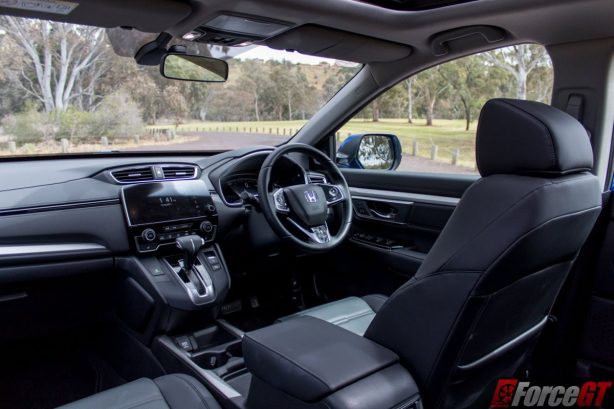 The family focused design process is easily seen inside with a number of clever decisions such as the lifted gear shifter that opens up the center console for extra storage and a roomier look. The front door pockets are not only deep and thick but also allow a small folding umbrella to slide neatly into a special opening.

Tall and short drivers are accommodated for with the padded sliding centre console armrest while the act of getting children in and out of the rear is easier than ever due to the wide opening doors.

The middle row seats offer excellent legroom that can be increased by sliding them further back, though adults will want to remain up front as the panoramic sunroof and roof mounted vents sacrifice headroom in the name of comfort for children. The rear seats are also best used to accommodate only little ones due to limited legroom.

The array of 4 roof mounted vents – a rarity in this segment and pricepoint – will keep the crankiest of children happy in both the mid and rear rows while the dual fast charge USB ports stop tablets or smartphones from running dry while in use by smaller hands. 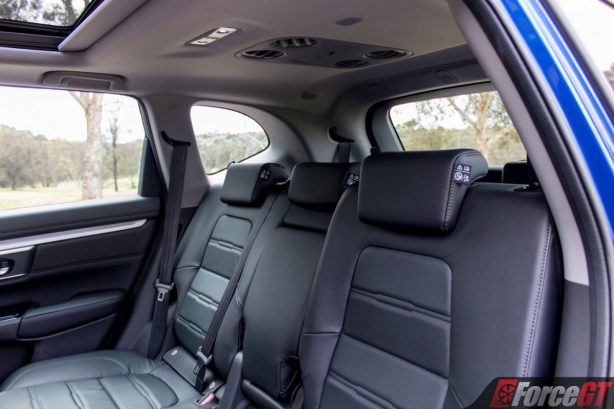 Even with the black leather trim the interior is a bright and relaxing environment for drivers and passengers alike. The standard panoramic sunroof draws light in and the trim makes use of high quality textured materials for a great finish. Also impressive is the tight fitment of panels and the general build quality.

If there’s one major drawback of the CR-V’s interior design then that fault lies squarely on the dash mounted infotainment system and attached speakers. Digital radio is absent and the sound quality produced by the 8 speaker system loses its composure at louder volumes. It’s a real shame as there’s HDMI, USB, Bluetooth and both Apple CarPlay / Android Auto connectivity with only an auxiliary input missing from the list. The included 7-inch touchscreen is a fingerprint and dust magnet that could do with a more intuitive interface and use several extra notches of brightness adjustability for those extra sunny days. 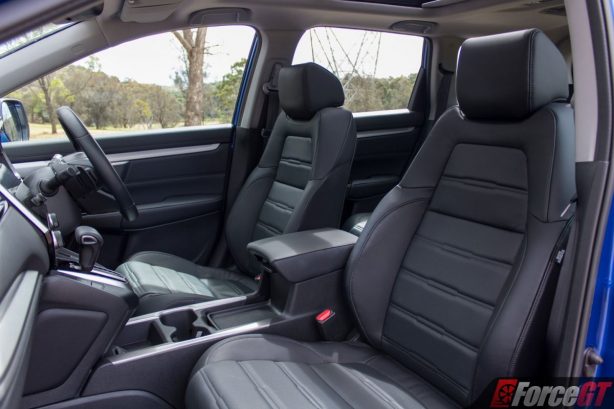 Access to the rear seats won’t require a gymnastic level contortionist talents thanks to the aforementioned wide opening doors combined with the sliding and folding mid row seats. The main downside of the extra pair of rear seats is compromised carrying capacity in the boot.

With the rear seats folded flat the boot floor has two flat levels for a combined total of 472 litres, down from the 522 offered in the 5-seat variants. Put those rear seats up and you’ll only have 150 litres available of capacity which is enough for light shopping and a few schoolbags. By dropping the rear and mid row seats into their flat position you reach the maximum capacity of 967 litres which is still shy of the 1084 available in the 5-seat offering.

The most important seat is of course the one with the wheel in front of it and Honda has done an excellent job extending comfort and convenience to both items. The wheel feels great in hand with the button controls situated away from idle thumbs. The layout is simple and intuitive though I would prefer the buttons to be less clicky and make use of a material other than hard plastic.

Beyond that the wheel adjusts along with the seat for a total of two memory profiles creating a driving position to keep all happy. Even when taking the corners harder than needed the side bolstering and shoulder support of the seats ensure you’re held in place rather than sliding around.

Typical of Honda, ergonomics are excellent with all switchgear within easy reach of your finger tips and located where they should be. 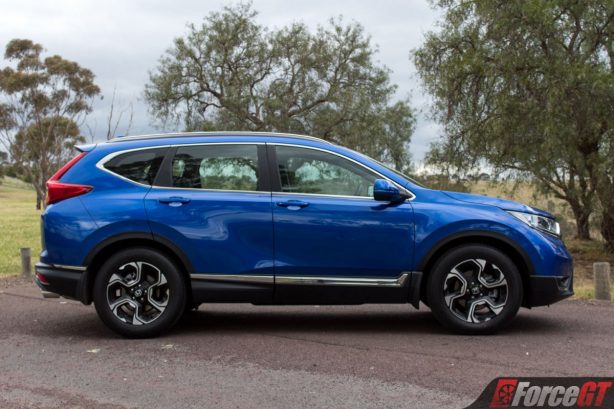 Mechanically the CR-V is designed to provide a comfortable and smooth journey rather than brute performance and offroad credentials. The powerplant is a 1.5-litre turbocharged 4-cylinder direct-injected petrol engine capable of 140kW when revved out to 5,500rpm and 240Nm of torque spread out from 2,000rpm to 5,000rpm. Despite displacing half a litre less than its predecessor, or nearly a litre less in the case of the previous AWD variant, the new turbo four is lively with minimal turbo lag. It’s completely up to the task of hauling a full load around town, though it can do with better refinement in the upper revs.

When pushed there’s a hint of torque steer in my front-driven VTi-L spec but this engine is in its element when cruising around at a relaxed pace. It’s in this operating window that the ace in the deck shows up in the form of impressive fuel economy. Over the test duration I managed a respectable 7.1L/100km which exceeded the 7.3L/100km rating Honda claims. Admittedly, this is due to a lengthy stint of freeway driving, but even so the CR-V is a light drinker.

Further assisting economy figures is the speed-limited cruise control that allows the setting of an upper speed limit, a valuable tool on our speed camera infested roads. Auto idle stop / start isn’t equipped but the refinement zapping feature is something I’d happily do without.

The continuously variable transmission (CVT) is smooth and not drony, though the gear lever is a little rough in its movement through the shifter. It pairs well with the engine, getting turbo power to the wheels in a dignified fashion while providing the driver semi manual control through the steering wheel mounted paddles. 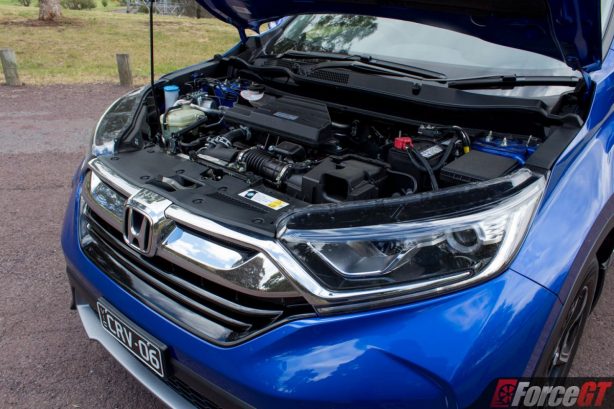 Where the CR-V excels yet again is in ride quality and comfort. The 18-inch alloys are wrapped in a 60 profile tyre that softens up imperfections on the road. Larger bumps can be taken comfortably without the need to slow down to crawling pace and the whole time you’re left with the feeling of absolute control. Quick maneuvers will result in mild body roll to remind drivers they’re directing 1,642kg of Honda SUV around, though things will still remain confidently neat and tidy through the corners.

In parking lots and at low speeds the steering is light making it less physically demanding than heavier units when going from lock to lock. Putting on the anchors is a tricky affair as the brakes are overly sensitive and touchy, made worse by a high brake pedal. I’m sure over a longer period of time a driver can acclimate themselves to adjust but in the one week I had with the CR-V I struggled to nail those smooth stops.

The CR-V is a sizable car that can make agile positioning a challenge when parking or reversing. To combat this Honda has designed into the CR-V great visibility out the sides and back. Further assisting drivers here is the inclusion of the blind spot reversing camera that has multiple lenses giving a wide or narrow field of view as required. Shifting lanes is a breeze thanks to the blind spot camera when moving left, something bikers and those with lower cars will absolutely appreciate.

The only area of visibility that the CR-V could improve at is oddly enough out the front. The raised bonnet edges obscure vision so drivers that like to sit low will need to be extra aware of the car’s boundaries. 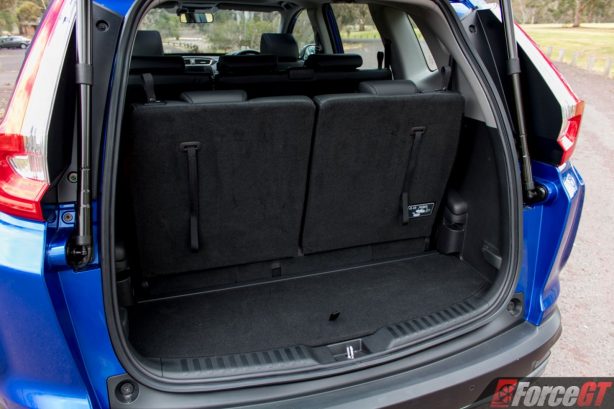 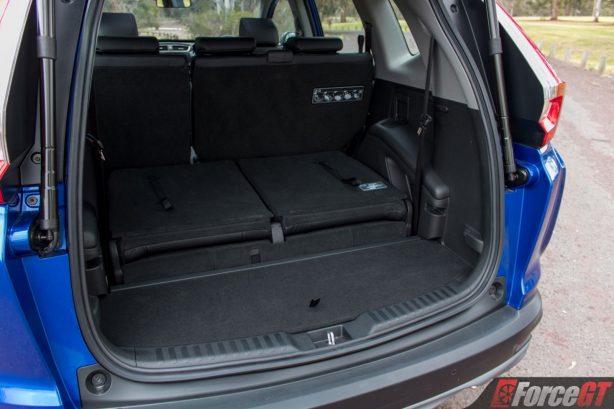 Given that the CR-V VTi-L is one step down from top spec it comes loaded with all the usual selection of safety and features expected in a higher trim model. Those who want all the bells and whistles along with 7 seats do miss out as only the 5 seat VTi-LX AWD scores the latest active safety features such as automatic emergency braking and adaptive cruise control.

What the CR-V VTi-L does get is a solid feature list that includes:

Advanced safety is taken care of by: 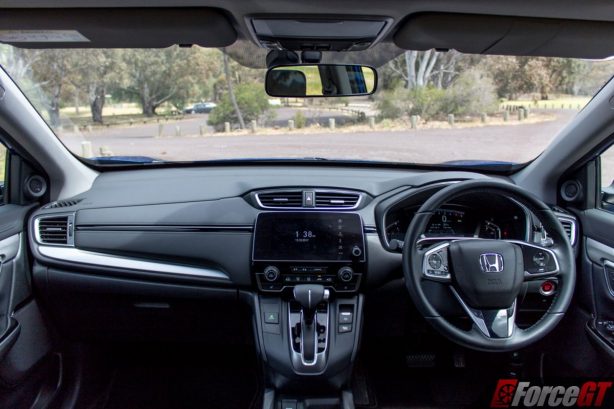 Honda has put together a very compelling package with the 5th generation CR-V. It’s made big strides in every aspect over its forebear and the result is a product that can well and truly give the best in the segment a run for their money.

With the first ever 7 seats VTi-L, the minor loss of boot space is easily made up for by the extra two seats and for bigger families it presents itself as a well featured, stylish and tempting option. The pricing is competitive at $38,990 plus ORCs which includes Honda’s beefed up 5 year unlimited kilometer warranty further sweetening the deal. For a family car that gets a whole lot right it’s worth a serious look.