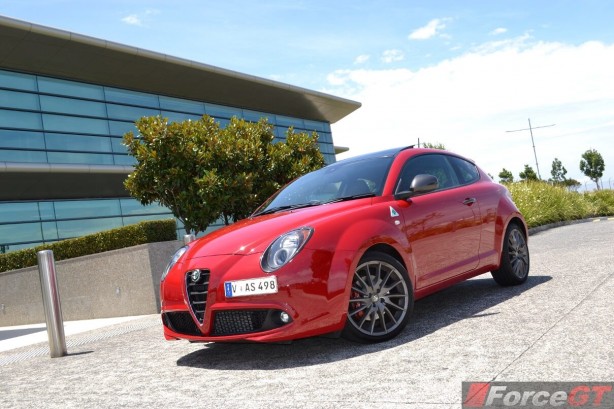 When we drove the Alfa Romeo MiTo last year, we liked its chic styling and generous features, but its driving dynamics hasn’t really convinced us. So,the baton is now handed over to the MiTo Quadrifoglio Verde, the performance flagship of the range.

Priced from $30,500 plus on roads, the MiTo QV fetches a $2,500 premium over the Distinctive model, the former top dog. The extra dollars get you a host of sports-inspired details inside and out, more powerful engine and tweaked suspension. Sounds fair to us, on paper at least. 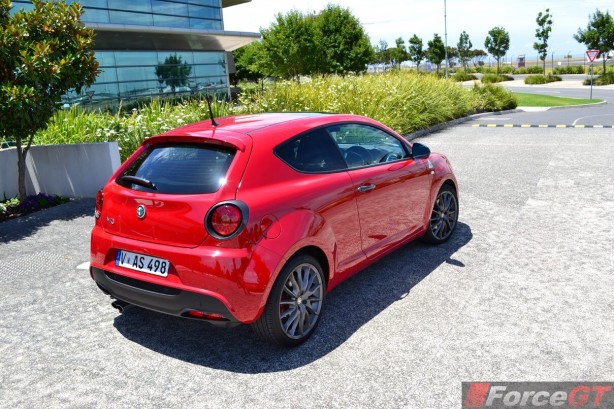 Inside, the MiTo QV’s dynamic spirit is highlighted by the new flat-bottomed sports steering wheel, trimmed in leather with contrasting white stitching. The handbrake lever and the gear lever also gets black leather with white stitching, while the Competizione ‘carbon look’ dashboard, special floor mats and aluminium kick plate (with Quadrifoglio Verde logos) add to the special feel of the interior.

The sports seats – height adjustable on the driver’s side and with lumbar adjustment for both front occupants – are trimmed in specific Quadrifoglio Verde fabric and finished with white-and-green stitching to complete the sporty touches.

While the cabin feels upmarket and comfortable, the ambient is still lacking a bit of crackers. The black, white and grey colour scheme looks rather monotonic for a sports variant of the range. Its Italian cousin, the Fiat 500 Abarth, does a better job in hotting up.

The MiTo can however, accommodate four adults in comfort. Weekend shopping is taken cared of by the 270-litre boot space behind the hatch. While not class leading, it is still over 100 litres more than that of a MINI Cooper, but just less than the Ford Fiesta. 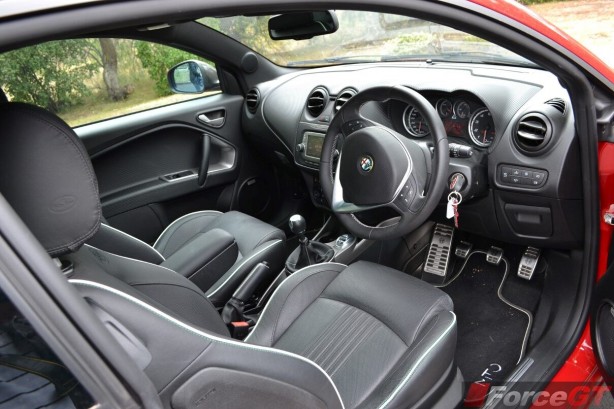 Like the standard models (except for the base variant), the MiTo QV is powered by a four-cylinder turbocharged 1.4-litre MultiAir Turbo engine, albeit with a different tune to develop more punch – 125kW at 5,500 rpm and 250Nm at 2,500 rpm to be exact.

It doesn’t help that the Alfa is also the most expensive amongst that lot, except for the MINI.

Push the MiTo’s alloy pedal into the carpet and it’s immediately evident turbo lag will be a constant companion if the engine is not kept spinning above 3,000rpm. It does, however, sound satisfyingly enthusiastic once opened up, complemented by a solid bassy tinge from the exhaust. 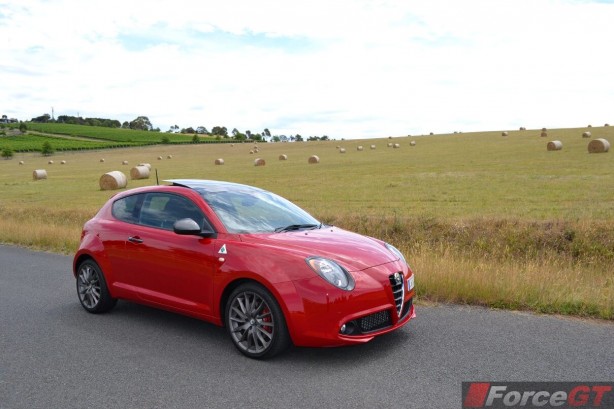 Paired exclusively with a six-speed manual transmission, the 1,145kg MiTo QV launches from zero to 100km/h in a claimed 7.5 seconds (7.6 seconds tested). Brisk, yes, but still not enough to embarrass the Fiesta ST driver or resist the French establishment.

That being said, the conventional DIY six-speeder is much better than the clunky twin-clutch automatic we had in the standard MiTo. Combined with the light clutch pedal, it’s precise and fun to use, both in sporty driving and around town.

Alfa claims the D.N.A. system in the Mito QV acts on the engine, brakes, steering, suspension and gearbox, allowing three different selectable driving modes – Dynamic when you feel like having some fun, Natural for normal driving, and All-weather for slippery conditions. Hence, DNA – an abbreviation formed from the first letter of each mode.

Other than different throttle response mapping, we find the effects aren’t that noticeable on the rest of the components. The steering still feels aloft and disconnected in Dynamic mode, the sportiest setting, while suspension changes aren’t sprightly transforming. 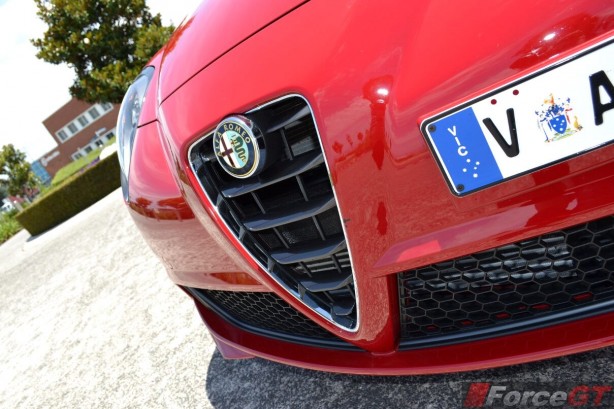 The Pirelli tyres provide exceptional grip and the Brembo stoppers offer plenty of bite, but the Alfa’s front end just isn’t as tied down as its key rivals, despite equipped with electronic dampers that continuously adapt to road conditions. Chuck it around the bends and you don’t get that sharp agility and adjustability you come to expect from a hot hatch. Throw in some mid corner bumps and the MiTo QV easily unsettles into a state of erratic nervousness.

This is not to say the Alfa isn’t a sweet handler, it’s still an athletic little whizzer, just that its slew of ultra capable competitors have spoilt us and elucidated its shortcomings.

Coming out of a corner at full blast though, the MiTo does feed the power through smoothly without much torque steer, probably due to the relatively modest power output and numb steering.

So, the MiTo QV isn’t quite a full blown hot hatch. It’s more of a sporty city car with added performance and a huge dose of style. It feels much better around town with the supple suspension and comfortable seats. At freeway speeds, the MiTo is surprisingly compliant, stable and quiet. With fuel consumption hovering around 5L/100km, it’s fairly economical for long distance driving too.

Being Italian, the MiTo oozes style and appeal few in the segment can match. Frameless doors, rounded head and tail lights, and that unmistakable triangular grille, the Alfa’s street allure is only bested by the MINI. 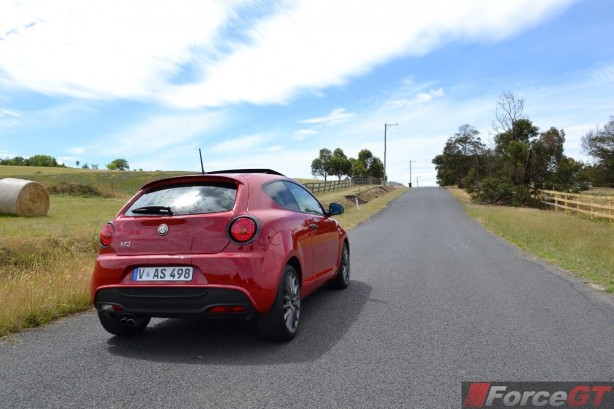 Equipment level is decent for this end of the market. The new MiTo QV comes standard with dual-zone climate control, dusk-sensing headlights and auto wipers. Alfa Romeo’s Uconnect five-inch touchscreen multimedia system is also included, with Bluetooth connectivity, Text Reader, Audio Streaming, Voice Controls, MP3, USB and Aux-In. It’s easy to use and responsive, but for a car that costs over $30k, we would expect satellite navigation to be standard also.

Our test car is fitted with the optional full-length sunroof. While it looks good, the flimsy semi transparent fabric cover fails to keep out the sun, not a good thing for road trips in summer.

The 2015 Alfa Romeo MiTo Quadrifoglio Verde is more of a statement of style than a dynamic benchmark. Where it lacks in outright power and some hard-edged corner carving skills, it makes up for in comfort and charm.

But, priced at the higher end of this segment, the Alfa ought to have them all, if it wants to hold back its cheaper and better rivals.