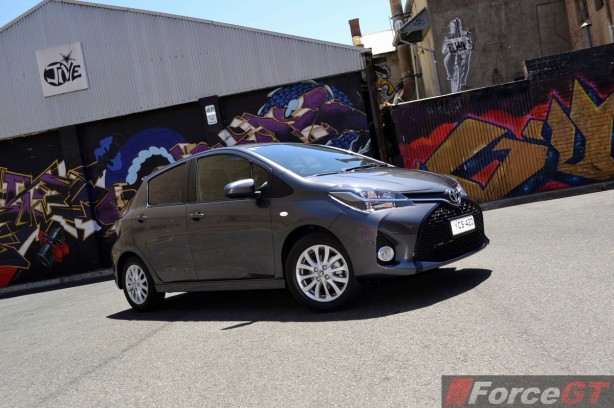 Toyota gave its baby hatch, the Yaris, a major facelift in 2014. Consistently one of Toyota Australia’s sales stars, the Yaris has found 186,000 homes since it arrived in late 2005, making it one of the most popular superminis in the country.

However, with the ultra-competitive Hyundai i20 and the rejuvenated Honda Jazz nipping at its heels, top off by the arrival of the recently refreshed and highly capable Mazda 2, there’s little time for complacency.

The 2014 update will address that. Partly. It brings a bolder styling, better equipment and a rejigged lineup, with the slow selling three-door dropped from the showroom floor, while the number of variants reduced from four to three.

Equipment is relatively generous across the board, with all variants now fitted with a reversing camera, cruise control and a 6.1-inch infotainment touchscreen.

But will this be enough? Let’s find out. 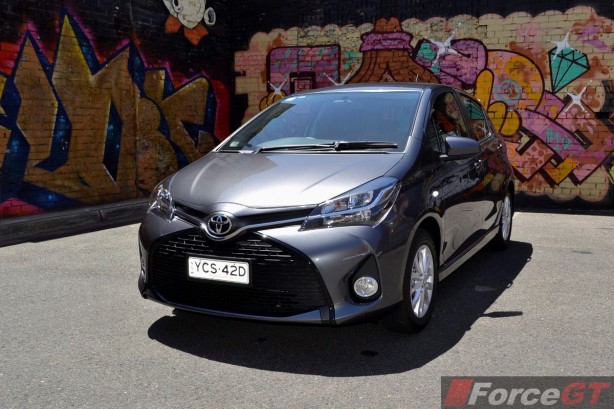 While the 2014 Yaris hatch still sits on the same platform as its predecessor, Toyota has introduced a more assertive styling that shares elements with the larger Corolla for a “family look”.

A slimline upper grille and large, trapezoidal lower grille that merge at the central Toyota logo now dominates the car’s front fascia. The logo is underscored by a chrome trim bar that runs through the length of the upper grille into the new headlights, emphasising its width.

Similarly, the LED rear light cluster and licence plate garnish have stretched horizontally to give the appearance of a broader, lower stance at the back. 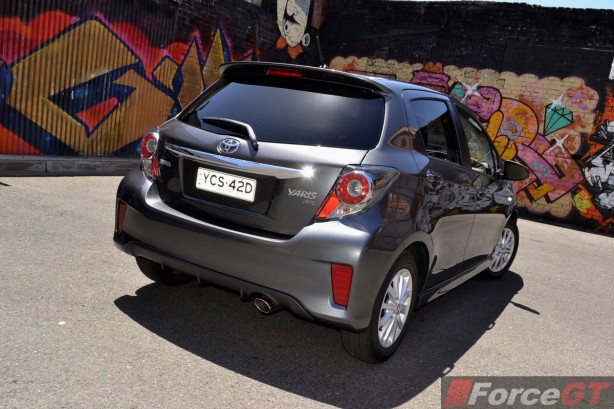 The Ascent and SX have redesigned wheel covers for their 15-inch steel wheels (instead of 14-inch), while the ZR gets freshly styled 15-inch alloy wheels.

While we think the new look Yaris – with its aggressive front fascia – will stand out from the supermini crowd, we are not sure if the somewhat blend looking rear end has a similar effect. 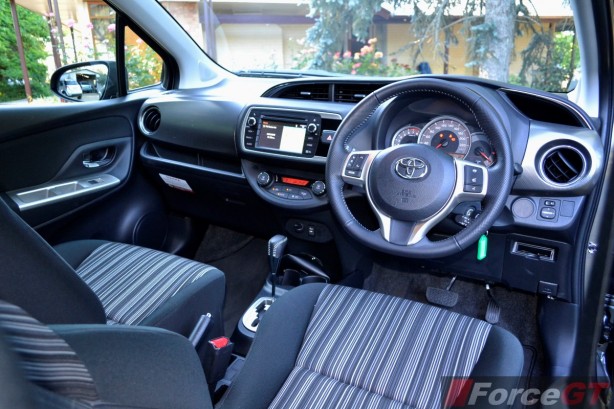 Every Yaris hatch now gets (finally!) telescopic steering-column adjustment as well, for a more comfortable driving position – if only it adjusts far enough. 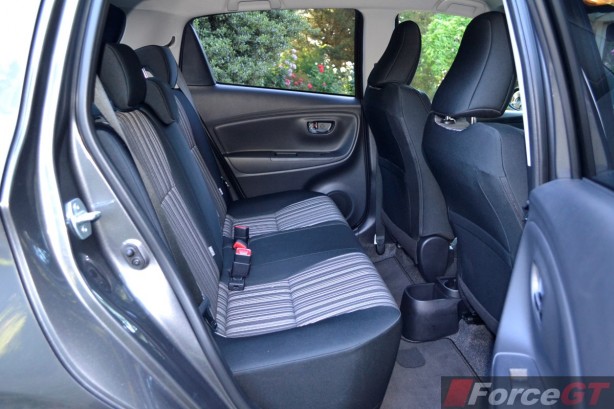 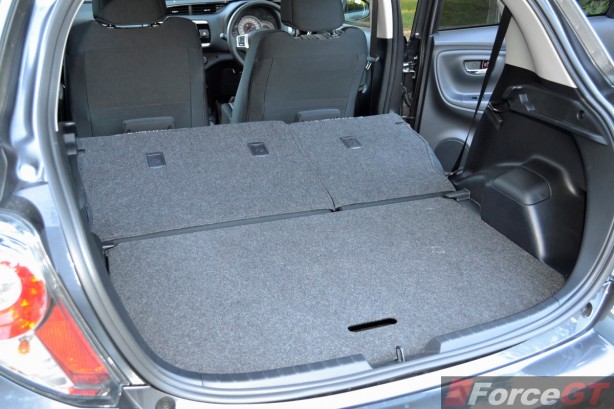 Happily though, rear seat passengers won’t face the same dilemma, with a reasonable amount of legroom even for lofty passengers. The seats are also comfortable with good under thigh support.

The Yaris’ re-packaged interior has liberated an extra 25 per cent of boot space, with the hatch now yielding 286 litres of storage. While its great news for the Yaris, it still trails the Hyundai i20’s 295 litres and the Honda Jazz’s 350 litres. Like its rivals, the rear seats will fold down, albeit not flat, to create enough space for bulkier items. There are also useful little nooks and cranny dotted around the cabin for our modern lifestyle.

Nevertheless, we can’t help but notice some glaring cost-cutting measures in the Yaris’ interior chief amongst them, the steering wheel buttons that don’t light up at night. So instead of answering a call from your mum, you may actually hang up on her, only to mute her call upon successfully answering the second time around.

The graphics and ease of use on the infotainment screen also appears to come from an era when the cassette tape and Atari games were fashionable.

While it is commendable a rear view camera is standard across the range, the quality of the image isn’t as good as some of its rivals and there are no rear parking sensors.

All these even in our range-topping ZR costing nearly $23,000. Really, Toyota? 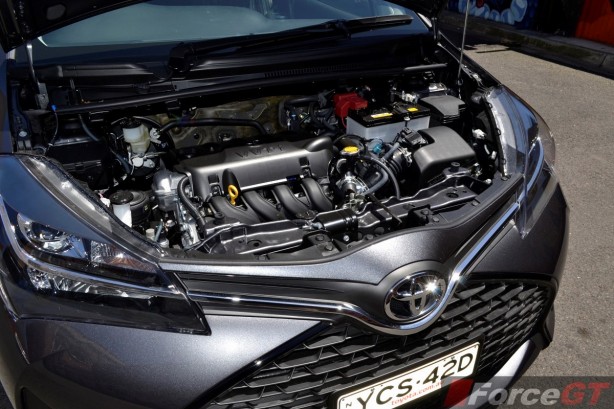 Like its carried over platform, the car’s power and drivetrain are also inherited from its predecessor.

Both engines come with a choice of either five-speed manual or four-speed automatic, except the ZR, which is automatic only. 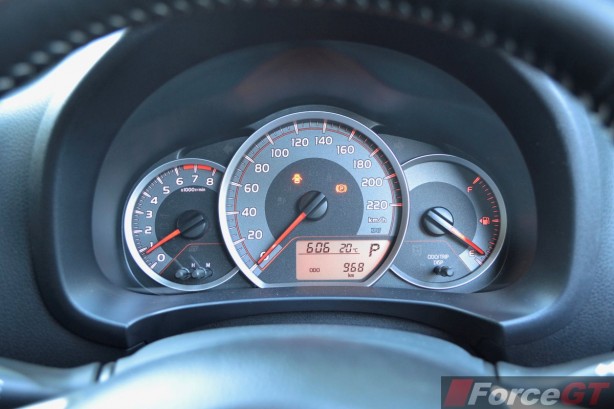 On test, while the small hatch doesn’t come across as lethargic, plenty of revs are required to keep the engine in the useful power band. The ancient four-speed auto doesn’t help either, and has the tendency to hunt around annoyingly for gears most of the time. The result is a noisy cabin and ho hum fuel economy.

During our time together, the Yaris’ trip computer returned an unremarkable reading of 8.1L/100km, almost 2 litres more than Toyota’s claim of 6.3L/100km on the combined cycle. 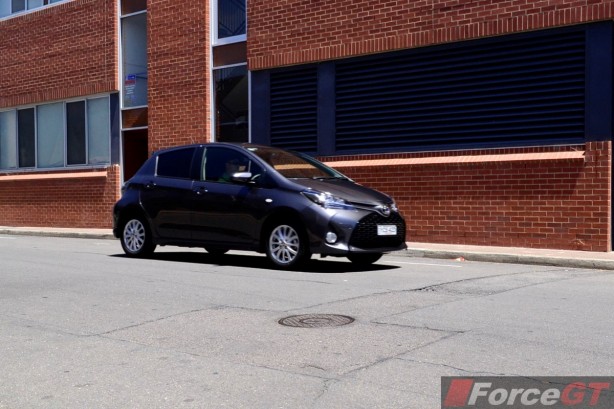 While the platform is largely carried over, the upgraded Yaris hatch benefits from a stiffer body shell and retuned suspension components. The result is sharper handling compared not only to its predecessor, but also the Honda Jazz.

You can throw the car into a corner at higher speeds without the car going into a frenzied understeer like the Jazz. It feels more planted with only subtle body roll through tight bends.

However, don’t expect the Yaris to be a hot hatch, as it isn’t. Its steering is incredibly light, even at speed, and there isn’t much in terms of feedback from the front paws either. 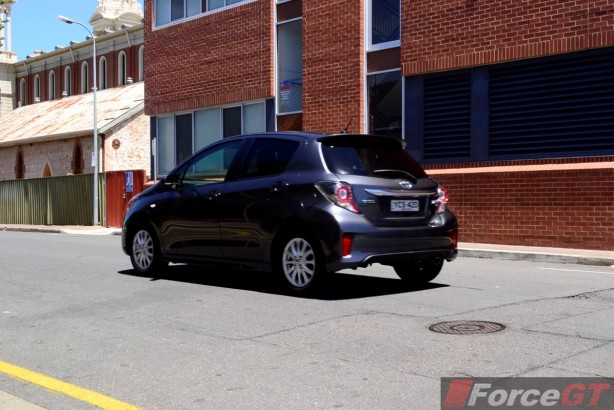 Its ESP – like most systems from Toyota – is annoyingly intrusive (just not as much as some other cars we have tested recently from the manufacturer).

For a more dynamic drive, we suggest the Ford Fiesta or the Renault Clio.

Around town is where the Yaris’ star shines brightest. It is easy to park, and due to better sound insulation, is relatively quiet as well. Its ride is reasonably comfortable, soaking up most road undulations with ease. 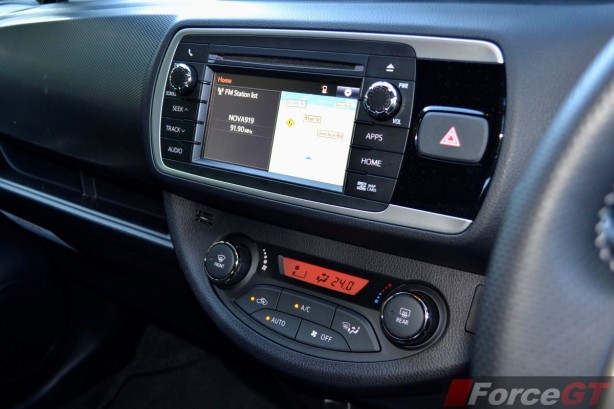 The new Yaris is fairly well equipped, with all variants now fitted with a reversing camera, cruise control, 15-inch wheels (instead of 14-inch) and a 6.1-inch touchscreen audio display with 6 speakers (up from four).

Safety kit comes in the form of seven airbags, including driver’s knee airbag, electronic stability and traction control, ABS and hazard lights that come on automatically under emergency braking.

While the 2014 Toyota Yaris hatch looks fresh, is better equipped and rides and handles better than its predecessor, we question its ancient power and drivetrain, both of which are getting long in the tooth for 2015.

The entire lineup, especially our ZR at $22,690, is also pricier than most of its rivals without bringing any significant features to the table.

However, Toyota’s undisputed track record for built quality and reliability, as well as the Yaris’ ease of use and practicality, is enough to ensure it remains one of the best selling superminis in the country.