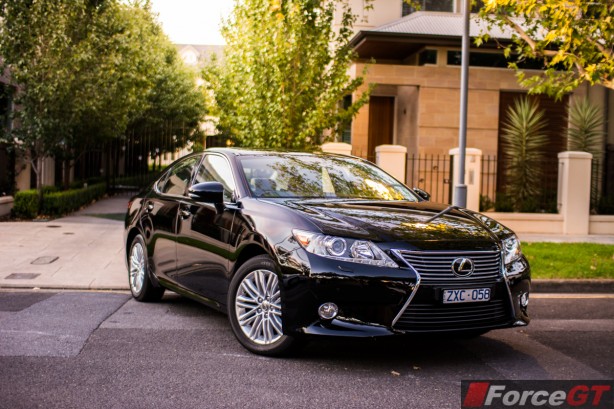 After taking a seven-year sabbatical, the Lexus ES is back in Australia.

Now in its sixth generation, the company hopes the new model will rekindle the flame with loyal Lexus customers who bought 7,000 ES between 1992 and 2006 – 2500 of which still returns to Lexus dealers for regular servicing.

For a model that many dismissed as just a Toyota Camry masquerading as a Lexus, it might come as a surprise that 70 per cent of owners replace their old ES with a new one.

Such loyalty would undoubtedly be the envy of other luxury marque and one Lexus is keen on sustaining. So for the all-new model, the brand has gone all out to impress.

Not only does a hybrid ES 300h joins the ES 350 in the local line-up for the first time, it also leads with the pricing which starts from $63,000. For this test, we have been supplied with the latter, in range-topping Sports Luxury guise, but ForceGT will also be reviewing the ES 300h hybrid soon. 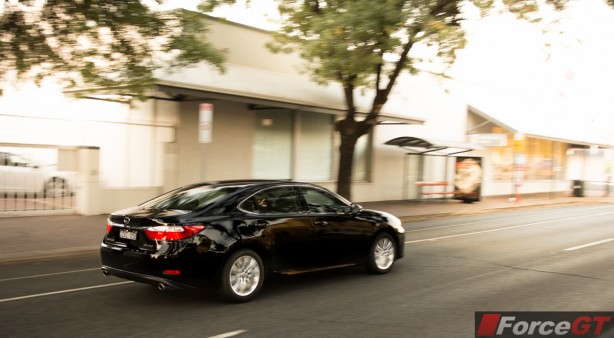 With a bold new look shared with the brand’s recent models, the 2014 Lexus ES is certainly more daring than any of its predecessors. While some may find the overall shape a little too formal next to the flamboyant IS, the ES is actually better proportioned.

Built on an all-new platform that Lexus insists isn’t shared with the Camry, the ES sits on a 100mm longer wheelbase compared to the previous model. There is ample room both front and back with the sumptuous leather seats as comfortable as your favourite lounge chair. Rear seat passengers also enjoy class-leading legroom as well as their own climate control and bum warmers (outboard passengers only). 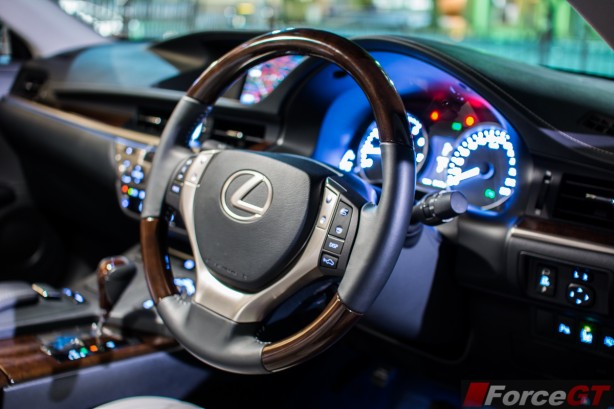 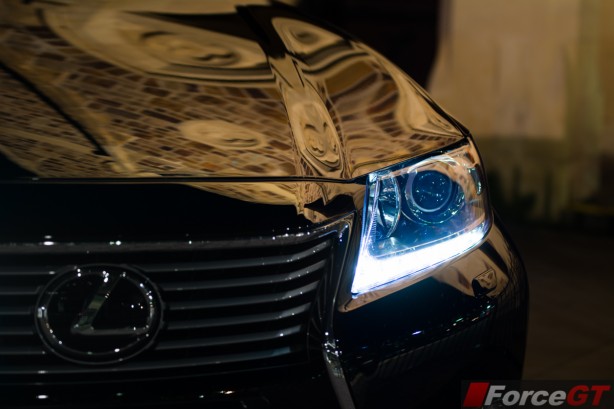 Like all Lexus’, attention to detail and craftsmanship are astonishing. The delicate stitching on the dashboard, for example, is done by one of only twelve selected craftsman who had undergone an excruciating selection process – folding an origami cat from a flat sheet of paper. With one hand. In under 90 seconds.

The power windows slow down as they approach their fully opened or closed positions, so occupants are not upset by the “loud bang” when the window hit the frame and interfere with Beethoven’s live-like Symphony Number 9 from the fabulous 835-watt Mark Levinson sound system.

Significant work has gone into reducing overall noise, vibration and harshness (NVH) as well. Like a library on wheels, the ES cocoons its occupants in velvety comfort and calming silence. It’s hard not to feel fresh even after a few hours behind the wheels. 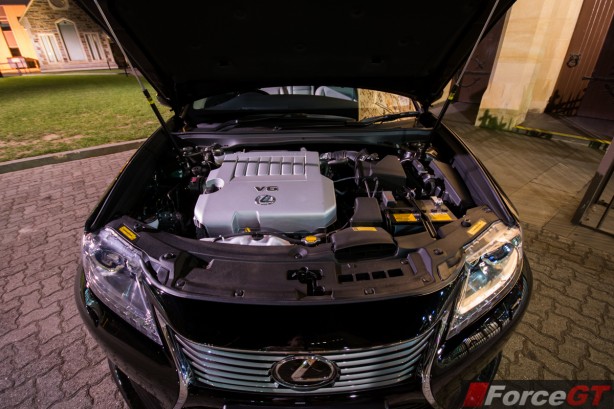 At under 1,000rpm, the engine is almost silent, without a hint of vibration being transferred into the body, thanks to its active control engine mounts. The new car’s platform is also more rigid due to an increase in the number of spot welds on the front and rear door openings. The position of the welds in the door surrounds and wheel housings have also been optimized for added stiffness.

The result is a high level of straight-line stability that adds further to its refinement repertoire. 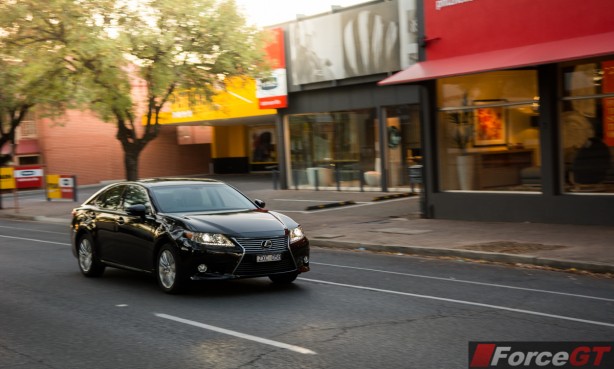 While the Lexus ES has never really been about outright handling and corner carving abilities, Lexus engineers have however, managed to keep the driver interested with surprisingly tight turn-in and decent grip from the 215mm wide tyres.

There is a fair bit of body roll when pushed and the car gets twitchy on fast corners. It’s steering is also slow and as responsive as cruise liner changing direction, even with Drive Mode Select in Sport.

Its six-speed auto box can also take too long to kick down and usually does so at the most inappropriate time – on a corner exit. The sudden surge in torque to the front wheels causes an unsettling effect on the nose that in turn, brings the electronic stability control nanny out of its slumber immediately. The system, with the subtlety of a Lady Gaga hair do, reacts instantly to cut power just when you need it most.

However, these are likely to be moot points and an unfair assessment given the ES’ target audience who are likely to use their car to get from one lawn bowls club to the next. 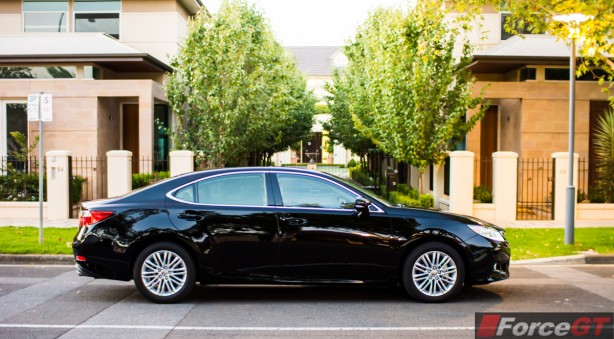 Lexus has consistently been one of the most well made cars in its class and the ES is no difference.

According to the Japanese brand, the entire production process is overseen by 19 ‘Takumi’, or master craftsmen, who train, recruit and evaluate the results of the entire 7,700 ES production facility staff!

The car speaks volume of such commitment, with not a panel out of place and everything is exactly where they should be. There isn’t a squeak or rattle from anywhere within the car either.

After a week of testing that includes snaking up twisty country roads, cruising on straight freeways and getting stuck in the daily commute, the Lexus ES 350 returned a real world combined average of 11.5L/100km against a claim of 9.5L/100km.

That’s almost line ball with the slightly more powerful, but also 20kg heavier, IS 350 that we tested late last year. 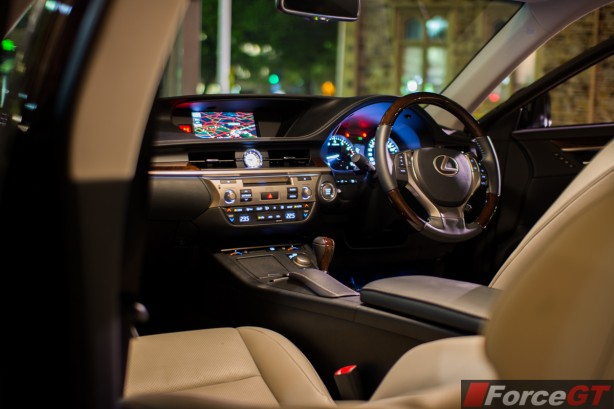 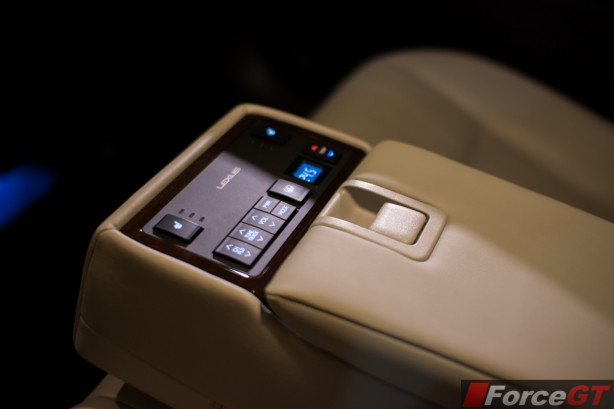 The only criticism is the 3.5-inch multi-information display sandwiched between the instrument binnacles which looks like an after thought.

The 2014 Lexus ES will no doubt receive a warm welcome from loyal customers who have missed the model when it left the country in 2006.

Accept the fact that the ES is a grand tourer with ultra comfortable seats and more luxury amenities than a Versace Hotel and you have a decent car that rides well with a tad of driver involvement thrown in.

Otherwise, the brand’s brilliant new IS sedan is a better investment with the same level of equipment and a much better drive.